Oh happy day. I can’t tell you how much we were looking forward to this injection. We did it in the middle of the week and are now finally fully vaccinated. This will make our further journey so much easier and it will save us some quarantine and a lot of hassle. While the first vaccination knocked us both out for almost two days, the second vaccination was almost without side effects. We were able to toast our new freedom with a glass in the evening.

However, it was an adventure until we finally made it. Unfortunately, the worst thing France has to offer has Guadeloupe firmly in its grip: bureaucracy. Hard core bureaucracy. No deviation from the rule and no special cases. As foreigners without a “carte vitale”, we are inevitably special cases. And at the moment there are hardly any non-French people in Guadeloupe who dare to express any special requests..

Yet everything would have been so simple, because there is enough vaccine here. The infrastructure with vaccinating pharmacies, doctors and plenty of vaccination centres is remarkably good. The locals have priority, of course, and that is absolutely right. But they don’t necessarily queue up enthusiastically. Before the vaccine spoils, one can also vaccinate the few foreigners, i.e. us. In Martinique there is a vaccination programme for foreign sailors. Unfortunately not here, so we have to be very active to find a way for us.

Six weeks ago, we were able to motivate a doctor on a small island to inject us with the remains of his vaccine vial. He took 160 € from us, but forgot to mention that AstraZeneca in France – so also in Guadeloupe – the next injection is only given after 12 weeks. And he also forgot to mention that the vaccination is free in Guadeloupe. C`est la vie.

On the main island, we then spent days organising our second vaccination. Pharmacies, vaccination centres, hotlines – rien ne va plus. Special case=collapse. We didn’t stand a chance in the normal, formal way and of course we didn’t want to wait another six weeks. For one thing, we had been here long enough and for another, it would already be hurricane season.

Finally we made it

And one fine sunny day, we found two super nice and competent doctors who gave us the second vaccination exactly 6 weeks after the first. And according to AstaZeneca, that’s completely ok. Nice side story: one of the doctors was born on a sailing ship and she sailed with her parents for years of her life. By the way, the second vaccination was free of charge.

So now all is well for us, Ka and I are now officially Caribbean-ready. St. Barth, Dominica, St. Vincent and Grenada have already introduced relaxed rules for vaccinated sailors and so more destinations are slowly opening up for us. Now we just have to finish upgrading the Rivercafe and then we will enjoy a whole new level of freedom. This morning, four guys appeared on the scene and started with the solar installation. However, parts are still missing, which – as we were assured – will be delivered today. We should be done next week and then we will finally sail further south. 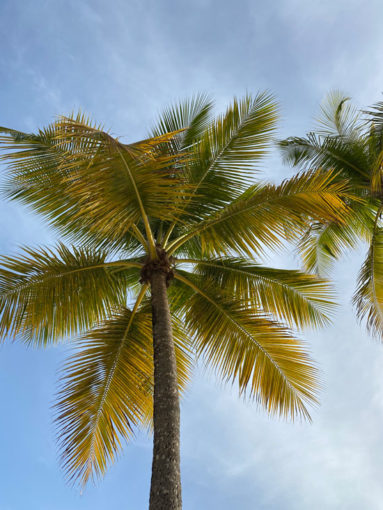 We had plenty of delays and stupid excuses because of our solar installation. And this is another Corona story. Sometimes I think C19 is the perfect excuse for excessive “serenity”.

The electrician we trust, Stéphane, unfortunately has a back office at Fred Marine that doesn’t work nearly as well as he does. The guys didn’t check if our material was on the promised cargo vessel from Europe. It wasn’t. But delivered with a total ridiculous  explenation. The next vessel from Le Havre took 10 days to Guadeloupe, plus customs clearance and later departure images it easily 3 weeks delay. The faster transport by plane didn’t work either, because lithium batteries are not allowed on board an airplane.

Why Corona prevented the job from being done properly is beyond me. It’s true that cargo prices have exploded and fewer ships are sailing. Wouldn’t professionalism be important just then? When our material finally arrived, the installation work had to be arranged unexpectedly, who would have thought that? And then suddenly and unexpectedly a holiday appeared in the calendar. Corona seems to have previously unknown side effects after all.

The sloppiness at the Fred Marine Office cost us three weeks. Well, better three weeks in Guadeloupe than in Blackpool.

Here, the exemption status has been extended until 25.5. This means that shops will only be open to a very limited extent and restaurants will still be closed. The radius of movement is restricted and there is a curfew from 7 p.m. onwards. 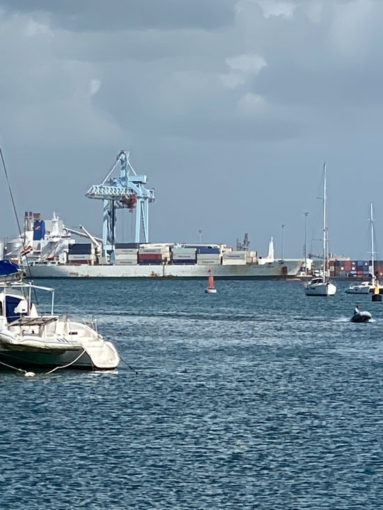 Everything is getting better again

But we have the tender impression that the difficult time is slowly coming to an end. Plenty of ships lie abandoned here because the owners are not allowed to enter from the USA, Canada or Europe. This makes for a bizarre atmosphere. It’s getting dramatic for some, because the hurricane season is about to start. It’s certainly not the best feeling to have your vessel unsecured in Guadeloupe, in one of the main tracks of summer storms. Whole fleets of charter boats that have been lying motionless in the marinas all season are also still abandoned at the jetties. What a fortune is being burnt there every day.

In positive hope of a soon completed solar installation, we are now slowly but surely preparing to head south. Next week we should cast off. We are already starting to stock up, because nowhere in the Caribbean is that better than on the FWI. /Holger Binz

3 thoughts on “The second jab”