Strange things have happened to us

Our journey continues. From St. Barth we wanted to go to St. Kitts & Nevis (55nm), to Montserrat (35 nm) and finally to Guadeloupe (55nnm). Each stretch a day trip. So we had to check the entry regulations of three countries and prepare ourselves for them. In addition to the normal entry requirements, there are still always annoying – and freaky – C19 requirements.

We are big fans of the islands of St. Kitts and Nevis (SKN) especially Nevis. So we were looking forward to the trip and a few days there. In the sailing community, the double island has a miserable reputation as extremely unfriendly to sailors. We couldn’t believe it – but unfortunately it turned out to be true.

Before departure, I dutifully went through the required online registration of SKN (KNAtravelform.kn). It didn’t work, an input field for the last country blocked the whole process. In three different browsers. Now it happens that some systems don’t like MAC. So I went to our buddy Paul (I changed the name, more later) who also has Windows computers. When we failed on his computer too, I saw the biggest smile on his face. You need to know that Paul owns an IT company that develops immigration systems.

He made SKN an offer and it looked good. Then the minister in charge asked him to add in a little extra money to his offer for a good cause, for her. Paul didn’t like that and the contract went to a Canadian company. The greedy lady is said to be in jail right now. The Canadian system is rubbish, which explained Paul’s good mood. If you give the wrong information about the last country of departure, it works. But this is an immigration violation. The neighbouring countries of St. Martin and St. Barth, cannot be selected. Of course, my mails to SKN Customs were not answered.

Ok, maybe it’s possible without online registration. The C19 regulations of SKN are also like at the beginning of the pandemic. We would have needed an antigen test in St. Barth, which must not be older than 24 hours, but must be sent at least 24 hours before entry, via the non-functioning online registration. This requires a Dr Who. After arrival, we would have needed a PCR test for 150 USD p. p.. And for departure another one, which would be necessary for Guadeloupe for those entering from SKN. Altogether 900 USD for a few illegal days in Nevis (because we would have had to falsify the entry data).

Nevertheless, we sailed the 55 nm to Nevis on Monday and spent a night on the fantastically beautiful beach between Charlestown and the Four Season Hotel. With a yellow flag up. Anchoring is prohibited in Nevis and there are only 10 working mooring balls there – for all visiting boats for the hole island!!!! And some of them are used by locals. You might as well put up a sign: “Visitors must stay outside”. But no sailors come anyway, because of the barmy requirements and poor processes. The Four Season Hotel seemed pretty empty too. SKN actually does everything to keep visitors out. Great done guys, your cunning plan is working. It must be a perfidious plan because no one can be that incompetent.

We were both extremely sorry that we were allowed to go ashore at last in Nevis. The island is something very special and the old estates “Golden Rock” or “Lady Nisbets” are places with unique charm. The nature is lush green and even the capital Charlestown is nice. It has a special atmosphere.

The metal wall of Montserrat

The next morning at sunrise we sailed on to Montserrat. This is probably the least touristy island in the Caribbean. Almost no hotels but an active volcano instead. Here, too, the C19 protocol was too stupid for us to go ashore and the anchorages also have limited charm. More than half of the island is a restricted area because of the active volcano. You can anchor in the north, in Little Bay. Half of it consists of mooring balls for fishing boats and the other half is a buoyed entrance to a pier the size of a dwarf, where we could not imagine a proper vessel moored with the best will in the world.

Very little anchor space remains. Next to us, another visitor anchored so awkwardly that virtually the whole bay was occupied. We dropped our anchor in the buoyed channel and after several radio conversations with Port Control, there were no objections. We went to sleep. At 1.00 am, the noise of a mighty anchor chain woke us up. Not even a boats length away from us, a large cargo vessel had moored at the pseudo pier. We fools were lying in the channel but the helmsman had to be brilliant. Backwards, on his anchor chain, he steered his vessel past the Rivercafe as if we weren’t even there. No horn and no fuss. When we jumped out of bed and just saw a huge metal wall in front of us, we were at a loss for words. Only later did we notice the name of the ship: Midnight Dream – what an irony. 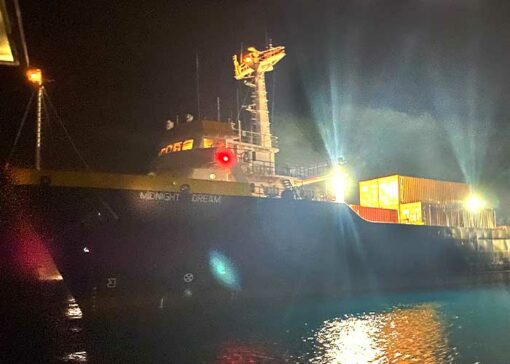 Midnight Deam right in our stern

From 1.01 am, of course, we stood vertically on deck and inhaled the heavy oil fumes. We radioed the cool guys and they just said relaxed that they would leave again in 1.5 to 2 hours. We promised to turn the Rivercafe away then. They didn’t seem to care. A small thrust of their bow thruster would probably have driven us away anyway. After an hour, they relieved us of our breathing problems and without any information to us, they cast off again. I guess an elephant doesn’t tell a flea when it’s running. No bet that we were a lot more excited than the guys on the “Midnight Dream”. Our night shock lesson: anchoring in the fairway is really not a good idea. Even if the Port Authority doesn’t care. We are not that cool by a long shot.

A few words about the sailing. The weather forecast promised wind from St. Barth from 105-115 degrees, maximum 20 kn in gusts. On the way from SBH to Nevis, the wind strength was almost right, but the angle was 130+ degrees. So we changed course and sailed north to St Kitts instead of the Kitts-Nevis Passage. It was a pleasant sailing day.

The following day from Nevis to Montserrat was just nasty. Instead of 1.2 m wave it was 2.5+ with very short frequency, wind 140 degrees against us. Due to the swell, the Rivercafe was completely encrusted with salt up to our helm station at a height of 4 metres. 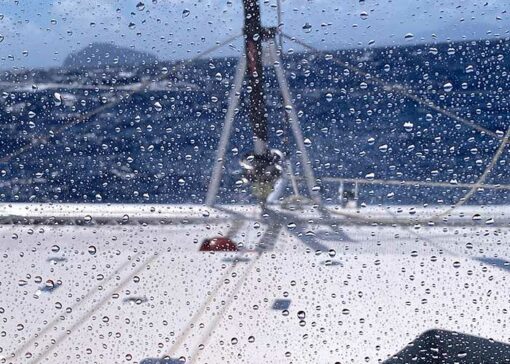 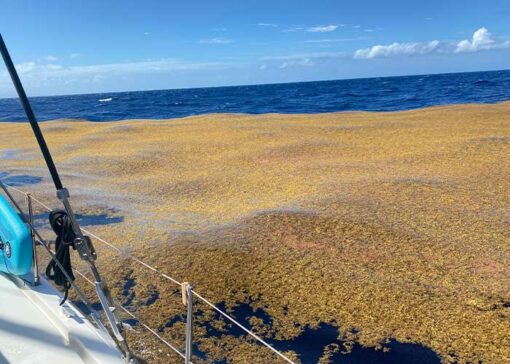 We had the same experience from Montserrat to Guadeloupe. The announced max. 20 kn became 30 kn, the wave height was twice as high. It was really unpleasant. Instead of studying useless weather reports, we could probably read coffee grounds or the flight of seagulls. What the hell are the weather guys doing for their money?

When we arrived in Deshaies, a supposedly sheltered bay in Guadeloupe, we had 32 kn of wind on the nose when we tried to anchor. It was too crowded anyway and then we added another 8 nm in a southerly direction and anchored in Malendure during the remaining daylight. A nice crossing is certainly different. It was one of those evenings when you wonder why you do this crap to yourself. 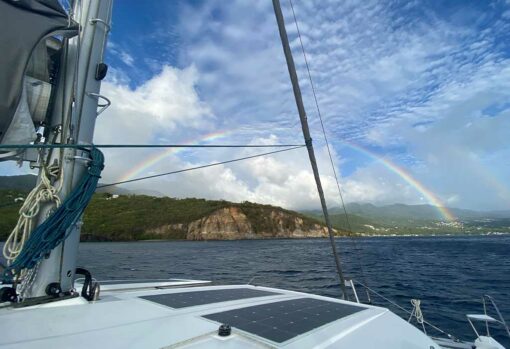 We are now anchoring in the Jacques Cousteau nature reserve and will wash the salt crust off the Rivercafe. That will take a while. And maybe then we will find an answer to the question of why we do this crap to ourselves. It certainly helps that we are anchoring beautifully right now, surrounded by abundant starfish and lots of marine life. Something always helps. / Holger Binz