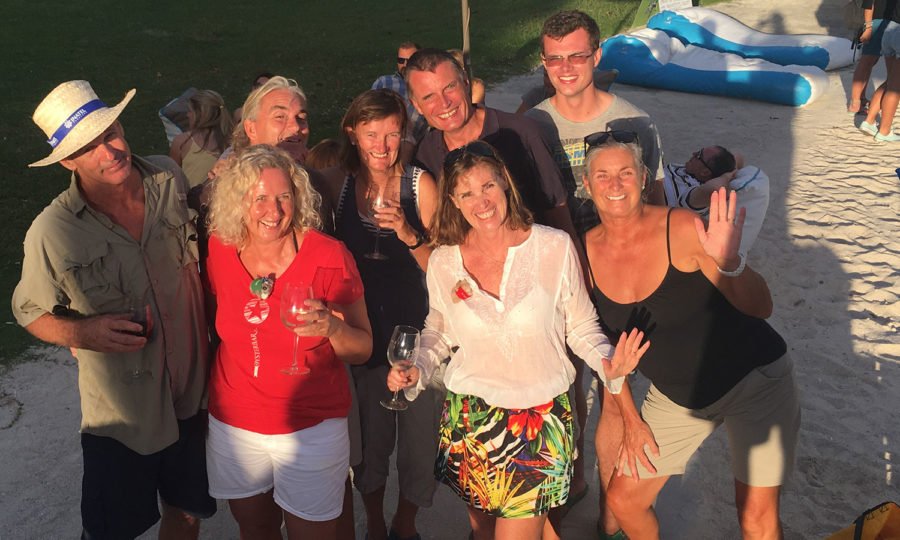 The acquaintances and friendships that one concludes on trips – travel acquaintances – are not of long duration. Thats what I thought. Before I made acquaintances and friendships when traveling. As a kid I was the homesick type. After two lonely six-week cures and some vacation visits to the grandma, I found it really worthwhile not to travel. And then I married a man who can not imagine anything better than to travel. To the Belgian coast to DeHaan, Malta and Lanzarote. That was all. Usually one or two weeks and I was back in the beloved home. Then we made the first longer cruise together. From New York over 10 Caribbean islands to Miami. And so my desire to travel was born.

People who smiled at me on the street just so nicely contributed to my well-being. All the more, those who addressed me. As a rather timid person, it took a while until I was sure enough to express my wishes and now and then to say “no” from time to time. The frequent “No Thanks” prompted me once to design a t-shirt that said “No taxis, no jewellery, no restaurants no tours …”. Ideal for shy people on tourist destinations.

I often come across people who just want to make themselves invisible. They definitely do not want tbbe approached, but they definitely want to see what’s happening right now.

As for this behavior, I can speak of a 180 ° turn. In the meantime, I’m just chatting to everyone and everyone. I am the horror of all the timid, restrained people who do not even know me and do not know if I’m a pickpocket or a bored millionaire. I speak to people who look helpless. And those who smile at me. People who travel with children, I speak per se. Only because I really like children. Almost all children, even those who scream in the restaurant or after a tiring day at 11 p.m. in the evening on the beach want to send their tipsy parents finally to bed. And so I (or rather, I have to say “we”) say that we met not only hesitant but also very open-minded people. We met Gitte and Joergen, a lovely Danish couple, who thought cruise was as strange as mine. Since 2007 we see them at least once a year. We were in Copenhagen and they visit us every year on the way to LeMans. Ty, who swam from his safe to our unsafe vessel – in the middle of the Atlantic – sailing the rest of the 600 miles with us, I will never forget. I got to know Tom the German voice actor of Collin Firth and some other fine guys who accompanied us from Valencia to the Columbretes and with whom we cooked in front of the Illes Columbretes spaghetti. And I met Rick and Sarah and Sarah and Peter and Ken and Jenny and Jenny and Peter and the Kunnerts and the Donskows and the McCuskees and many many more.

Conversations with strangers or travel acquaintances

Often the conversations with the initial strangers were very friendly. Often deep and enlightening and every now and then I wondered, why have not I told anyone else that? Talking to each other and coming from different cultures is very interesting. Understanding why people choose this or that, why Americans eat with only one hand on the table, how the Thai people show that they like one, or who cooks like what has become a wonderful science to me. Some of the people I met during my travels became beloved friends to me, with some I maile, others meet and others like my posts on Instagram. They mean something to me. Meanwhile, I feel like I have a human being almost anywhere in the World to go to if there is anything and unlike the anti-social media, these people are real and just there. As long as they are not on a journey like me. / KB