Strategies for the Hurricane Season

When you see the crews of ships hauling extensive provisions and the word “Azores” comes up more often, you know that the Hurricane Season is not far away. There is an official period for hurricane season in the Caribbean, from the beginning of June to the end of November. During this time, it is quite clever to do everything possible to keep the vessel out of the usual path of the hurricane.

The destructive power of hurricanes is unimaginable. In the hit list of the particularly nasty ones, “Wilma” holds the top spot with 340 km/h and then immediately some candidates, such as Katharina with 300 km/h. This is dramatic, because the effect of higher speeds does not increase linearly, but exponentially. For comparison: the highest measured wind speed in Germany was 191 km in Borkum. I knock on wood that we will never experience a hurricane. Already the increase from 6 to 7 Bft feels like doubling the windspeed. 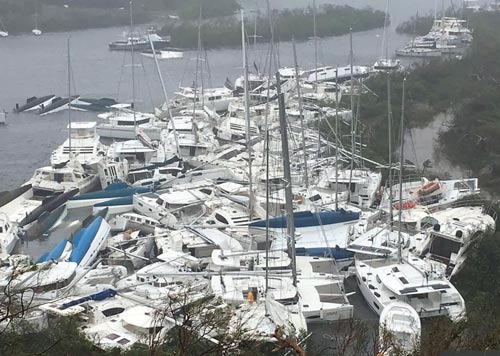 What does a hurricane need?

For a hurricane to become a hurricane, it needs three things. A large continuous area of water, because they can grow up to 500 km (250 nm) in diameter. The water temperature must be 26 degrees+ Celsius. And it needs the Coriolis force of the Earth’s rotation. All this makes the Caribbean the perfect stage.

But the impact of a hurricane depends not only on its strength, but also on its speed of passage. The whole structure – with the windless eye and the hellish wind speed all around – moves forward relatively slowly on a trajectory. It is amazing that the speed of such a hellish part is usually only 10-20 kn (20-40 km/h). In the northern hemisphere, it always moves counterclockwise. If a hurricane moves more slowly or even lingers – as Irma and Maria did in 2017 – the damage is all the more devastating when it hits land. 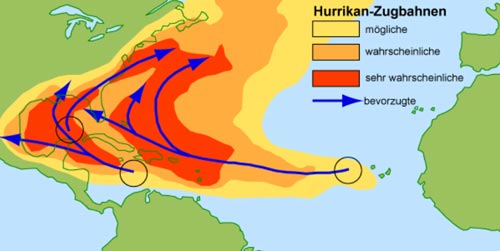 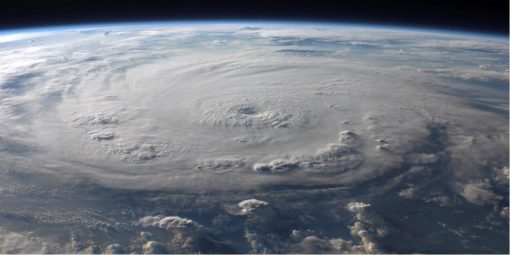 For sailors, the only option is evasion, and there are several strategies for this.

First strategy, there is the common pan, “over to Europe”. In May, many ships set off on the approx. 3-week trip to Europe, which is at least 6,000 km long. Mostly with a stop on the beautiful Azores. Those who make their way across the Atlantic in May have nothing to do with the storm theme. Instead of sailing themselves, many sailors also use a return transport their ship on a special cargo vessel for marine transport.

Two:  Evasion. Most insurance companies require sailors not to stay between the 13th and 33rd latitude. This is a zone from the US Chesapeake Bay (Baltimore) in the north to Grenada in the south. A belt of more than 3,000 km would thus be taboo from June to November if you don’t want to lose your insurance cover. Is this a smart rule? Friends of ours reported violent storms in the Chesapeake Bay, because hurricanes now sometimes travel up the US coast as far as New York. Stormy, but insured. The 13/33 rule causes sailors to split into north and south early and head for the USA or Grenada. The fact that Venezuela is so badly off and Brazil is closed reduces further evasion to the south.

Three: “Hurricane Holes”. These are places in the Caribbean that usually get off lightly or are even spared. They are usually sheltered bays with abundant mangrove cover. Mangroves are excellent at breaking waves and currents. They are said to reduce the force of the water by up to 70 %. This is a strategy for the optimists – and the most cost-effective.

Four: Ship on the hard. The owners crane their ship out of the water and place it firmly lashed to land. But this can go badly wrong, as Nanny Cay in the Virgin Islands showed. At least no crew is in danger, because they are usually at home.

Five: Safe places within the 13/33. There are places that lie within the belt but have never or hardly ever had hurricanes. For example, the ABC islands with Aruba, Bonaire and Curacao. Or the Rio Dulce in Guatelama. It doesn’t matter whether the insurance covers it. If it fits in with your route planning, it’s a smart solution.

The sixth strategy is the rarest and only for wild guys with very fast ships. Stay in the zone and just sail away when a storm comes, that’s the plan. An owner of a very fast ship once calculated that no hurricane could reach him. He usually sails at 15 kn/h and at the usual speed, he sails away from the hurricane. With the maximum spread of an area of 300 nm, it feels able to escape at any time within 24 hours. Of course, it is obligatory to take a look at the weather reports every day, because hurricanes do not fall from the sky. The formation is recognisable. But so do sailors of other strategies.

This season, the American NOOA (National Oceanic and Atmospheric Administration) has announced an above-average storm season. 17 storms, 8 hurricanes and 4 strong hurricanes are forecast. Hopefully they are wrong. But the list of names for storms and hurricanes is already prepared. It starts each season with letter “A” and then continues in the alphabet. If you hear “Henri”, that’s the eighth storm/hurricane of the season. Both women’s and men’s names are selected. 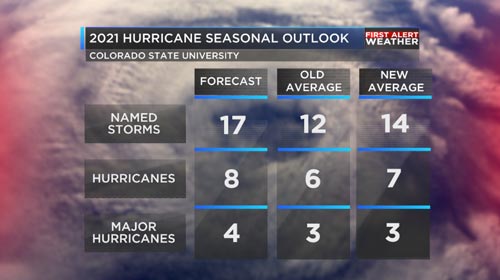 We have choosen the second strategy with the Rivercafe and will head south to Grenada. Statistically, we are safe there. But statistically, Ka and I wouldn’t been sailors either. Keep your fingers crossed for us and all sailors that it will be an undramatic season. /Holger Binz

6 thoughts on “We are off for a short while”