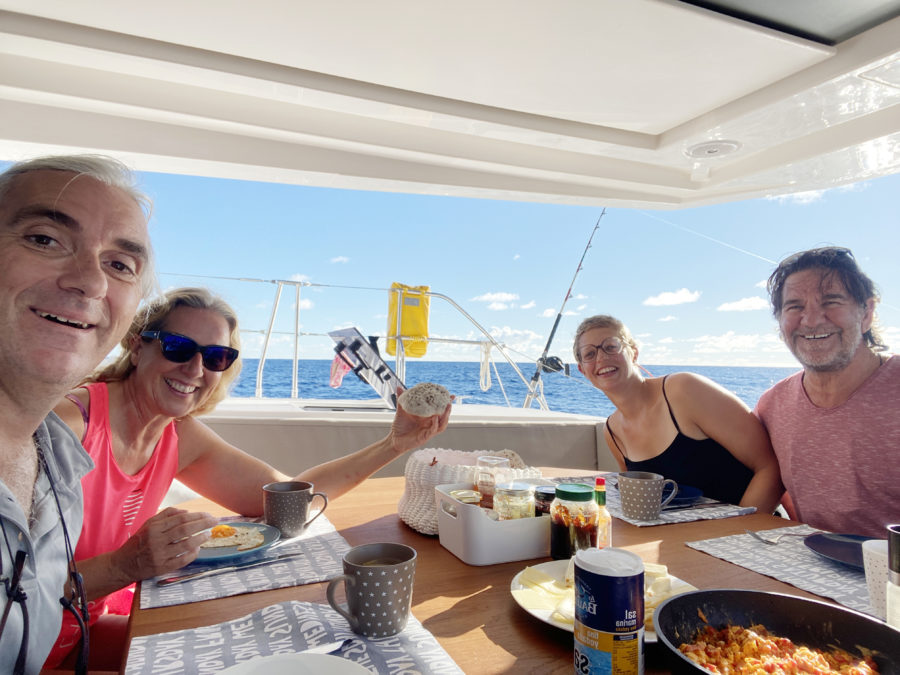 From Mindelo to the middle of the Atlantic

And then we finally got going. After a long wait, the 17 remaining ARC+ vessels were able to start on Monday (23.11). Someone in Cape Verde ended the kindergarden games and delivered our C19 tests at the very last minute. Hallelujah.

The mood of the last few days in the fleet was like racehorses, with crews digging their heels in to finally launch and all ships constantly ready to go within 2 hours. I guess Stefano from the ARC+ team was the happiest person of all when he could horn the 17 boats over the start line at 3pm and finally had us off his back.

Toni had decided to fly home at short notice and so there were four of us for the real crossing. We changed our watch plan from five to four and the day off for everyone was cancelled. On the Rivercafe there is always one person on watch, so the helm and radio are manned 24 hours a day. In addition, there is a stand-by in the vicinity. Two are off-watch. During the day the cycle is 4 hours (3*4), at night 3 hours (4*3).  The system is rolling and every few days everyone has to get up at midnight for dog-watch or at 3 am to get out of the bunk. This way everyone has enough free time and sleep. Unless, of course, the sails have to be changed or the sailcloth taken down at night because of a squall, for example. Actually, there’s at a sailchange almost every night. If you’re unlucky and actually want to sleep, you can then get some sleep at more unusual times.

But let’s get back to the sailing. Gary had the honour of sailing the start. We had studied the GRIP files, the weather data intensively and decided on our routing and strategy. Even though all the boats sail the same direct distance of 2,090 nm from Mindelo to St Lucia, there are a thousand different routes. And after one day you have no contact with the other ships. The Atlantic is so damn big that ships quickly head for higher or lower latitudes 100 nm away.

The direct route from A to B is called a “rumbline”. In terms of distance, it is the shortest way, but hardly ever the fastest. The wind, the waves and the current would have to be perfect for that, and that is quite unlikely. So longer is usually faster. In our case, we took a diversion of 80 nm to the northwest right after the start, while the 16 others steamed off to the west. Our plan was to be at a certain place at a certain time and then hit the right winds for our spinnaker course. So much for the theory. After the first day we were therefore only 14th. At the halfway point, it seemed to work out, because by then we were already in 6th place and the fastest catamaran.

The first night at sea began with particularly unpleasant news. Our water maker was on strike. So no fresh water for the next two weeks. Especially stupid because we had only filled up the emergency reserve and only one of our two tanks was full. We didn’t want to take any more water from dust-dry Sao Vincente and supplied ourselves at sea. Leopard via Sat Mail was no helpful. It’s stupid when the shipyard is not able to install a stable system worth a small car.

Our new frugality allows us 5 litres of water per day per person until St Lucia. And no, the rest is not topped up with alcohol. Crossings are completely alcohol-free for us. (The beer in the photos is alcohol-free).  So we shower, cook and rinse only with seawater. Have you ever cooked vegetables or noodles in seawater? It takes some getting used to, but it doesn’t have to be. Adding salt is no longer necessary.

The seawater showers from the bucket also take some getting used to. Everyone then has just under a litre of fresh water to rinse off. Every shower is also a peeling. But anything goes, with a rum punch and fresh water shower in St Lucia in mind. At the moment, that still seems like a mirage.

In the Sahel, these are probably still luxurious conditions, but well, we were looking forward to more comfort. However, our good mood did not suffer at all. Jana, Ka and Gary outdid themselves with sensational dishes, clearly not in my cooking league. My much more modest dishes enhanced the others all the more – everyone has to cook with us. Let’s see how long it takes before the three of them regret it.

It took about 3 days again until the “crossing mode” was set. Until the routine was back. The first days were quite wavy, up to 5 m waves shook us through, mostly 3-4 m. On the night watch, the waves look incredibly big and impressive as the ship surfs down the waves. We can sail pi by thumb half the true wind, usually a little more – and then suddenly there was a 15 kn on the display. We constantly change our sails to make the most of the changing conditions.

Then days later, the sea is flat and just 7 knots of wind push us forward with 3-4 knots. Nevertheless, we have been able to sail over 150 nm every day so far.

On our way from Europe to the Caribbean, we have to cross five time zones. The first one right on the way to Cape Verde. From there we have to set back one hour four times, which gives us four 25-hour days. Every 15 degrees of longitude we set back one hour to arrive in St. Lucia at local time. The second time on board is UTC, which always remains constant and is measured in Greenwich Mean Time. This means that our time on board moves further away from UTC with each degree of longitude to the west.

Shortly before half-time, we celebrated the 1st Advent in style. Ka whipped up delicious Christmas biscuit substitutes and Christmas music rang out over the calm seas.

After exactly one week, we have 1,100 nm behind us, half-time. Very light winds are forecast for the second half.  We’ll continue with part 2. /Holger Binz