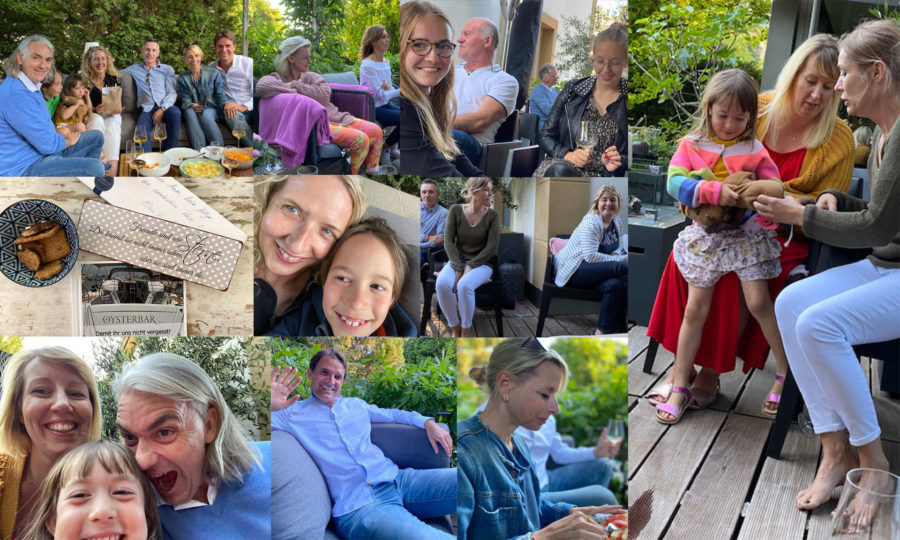 *Villmols merci = thanks a lot in Luxembourgish

There’s a lot of good news. Our Rivercafe is ready and as planned ready for handover on 1.7.20. Only we will be missing then.

Robertson & Caine was allowed to continue working in Cape Town after reducing the lockdown level. Good for South Africa and good for us. We were able to rebook our cancelled flights for a few days later. Thanks to Uli Fichtenberg – there is nothing like a highly capable travel agent. If nothing else comes in between, Corona will cost us only two days delay for the handover. How lucky we are.

So the plan is set that we will leave Luxembourg in June. But before we leave this country…

… we would like to say thank you. Our great neighbours and friends Sabine and Serge organized a surprise farewell party for us. Corona compliant. We could not say goodbye to our “Grevenmacher” guys in a more beautiful way.

And we want to thank for many wonderful years in a friendly and adorable country. For nice people, neighbours, friends. For excellent food, varied culture and tolerant internationality.

And then “villmols merci” to the Luxembourg administration. To the “Commisariat aux Affaires Maritimes” (Monsieur H.) and the “ILR” (Madame W.) for the super fast registration of our Rivercafe. And “merci villmols” to our tax authority Monsieur B. for helping us to find a good solution.

There are only 640.000 of us in this country and when you met someone, you never knew which language you could speak. Luxembourgish, German and French are our official languages, but if you parry Portuguese and English, you have a good chance of hitting the mark.

Visiting friends from other countries have always been irritated by the fact that we do not have one common language. This is what makes Luxembourg unique. We have only twice as many inhabitants as “Berlin Mitte”, but we are incomparably international with people from 170 nations and almost 50% “foreigners”.

The quality of life is higher than almost anywhere else, the freedom is unrivalled, boundless and we have no extremists. For people like us who have wanderlust in their DNA, Luxembourg is a perfect place to live. We have travelled to about 100 countries, have rarely been in Luxembourg for more than two months at a time, but this country is and remains something special.

It will be a great pleasure for me to sail our Luxembourg flag, the “roude Leiw” (red lion) around the world onboard the Rivercafe. I don’t know if and when we will come back, but at the stern we will always have a piece of Luxembourg with us.

So, it was very nice. And now it’s time for something new again. / Karin and Holger Binz