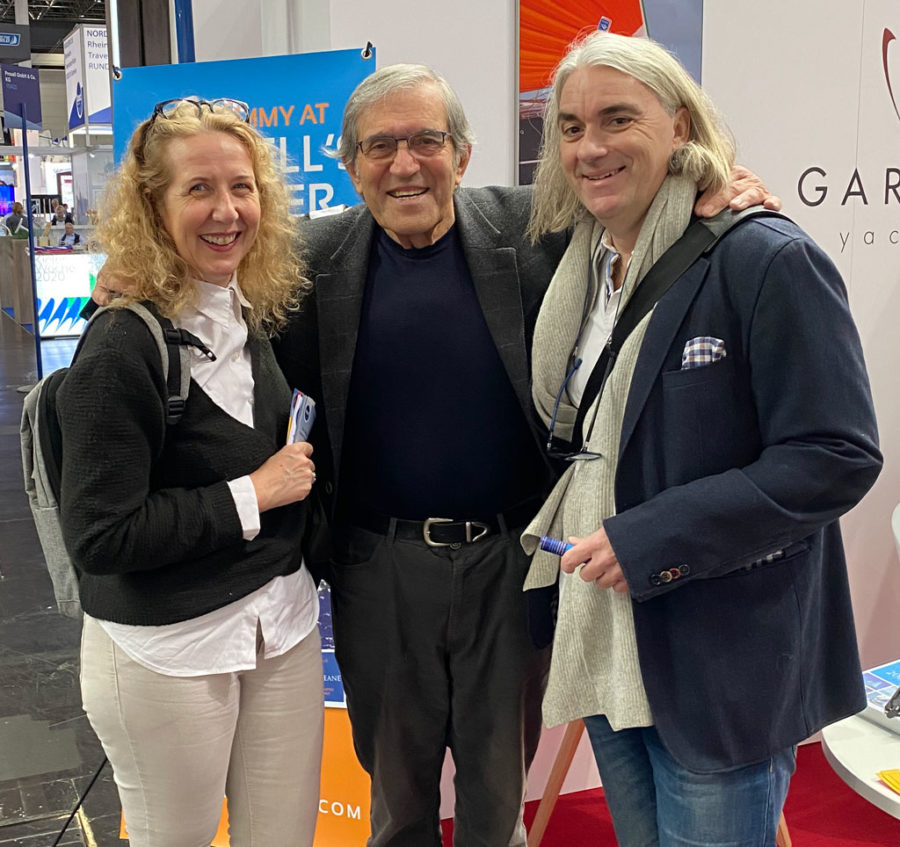 Jimmy Cornell sails around the world at age 80

When I first heard about Jimmy Cornell, I was still a rookie offshore. During the long winter breaks read sailing books of course  – like almost all seasonal sailors do. Jimmy Cornell’s were among the good ones, they were either entertaining or helpful. Or both. Just like himself.

When I met Jimmy Cornell many years later, I had a self-doubt crisis. Ka and I had just arrived double handed with our Hanse Yacht on the Canary Islands  Our first Atlantic Crossing was ahead of us and we had doubts if we were good enough for this challenge. We were sitting in a terrace restaurant in Lanzarote with a glass of wine and Jimmy calmed and motivated us. And who will doubt when a legend with over 200.000 nm in the wake tells you that you can do it. He was right and we were very grateful for his motivation. And it was also very entertaining. Who knows if we would set off today to sail around the world without this evening in Arrecife.

But what makes this Jimmy Cornell so special? He has that special aura that makes anything go. A single-minded serenity. He has completely changed sailing for ordinary sailors, for cruisers. In 1986, he invented the ARC, the Atlantic Rally for Cruisers. For the first time, this was the thrill for normal sailors to cross this huge Atlantic, alone but with support. It became a mega success.

Even today, at the tender age of 80, he has lost none of his charm. Jimmy is an entertainer, always has a story ready. And he no longer needs to prove anything in sailing. 3 world circumnavigations, the Northwest Passage, the invention of the ARC and 16 books, many of them standard works. His pilot charts should not be missing on any blue water ship. Undoubtedly a very remarkable lifetime achievement. When we recently met on the “boot” in Düsseldorf, he told us about his new crazy plan.

Instead of spending the evenings with his wife Gwen and a glass of wine in front of the fireplace or playing with the grandchildren at the age of 80, the guy is setting off once again for a circumnavigation. He calls his next project “Elcano Challenge”. Elcano was the man on Magellan’s legendary circumnavigation who completed the journey after Magellan was murdered in the Philippines. Jimmy probably feared that although Magellan became famous, nobody had heard of Juan Sebastian Elcano. In fact, Elcano deserves the honor of being the very first person to sail around the world.

This time he is sailing double handed with a buddy on an Outremer 4x catamaran – Jimmy has been associated with the Grand Large Group for years. With this trip he wants to honour the Basque by following the exact route and stopping only at the places where Elcano dropped anchor. The second aspect of this trip is an ecological one: he sails Co2 free with electric engines only. Probably Outremer’s marketing department has squeezed an El (electro) Ca (carbon) no (no) out of it. But still it is a good idea, because powerful electric engines are not yet available for cruisers. And the last aspect is a typical Cornell: he wants to prove that you can still deliver an exceptional performance even at the “more mature” age of around 80. His fellow sailor is the same age as him.

In October, the race is scheduled to start in Seville. So our courses will probably cross off Brazil when we sail from Cape Town to the Caribbean. In memory of Elcano, he is not allowed to stop until Rio de Janeiro, while we make a stop in the nature reserve of Fernando de Noronha. In July 2021, the Elcano memorial circles will end after 30,000 nm (55,000 KM) in Getaria, the birthplace of Elcano. I guess that he will be much faster with a 4X Outremer than Elcano 1522.

I am curious to see what new idea Jimmy Cornell will pull out of his hat for his 90th birthday. Then he’s probably still too young for the seat by the fireplace. More about his journey you can find here www.cornellsailing.com. / Holger Binz