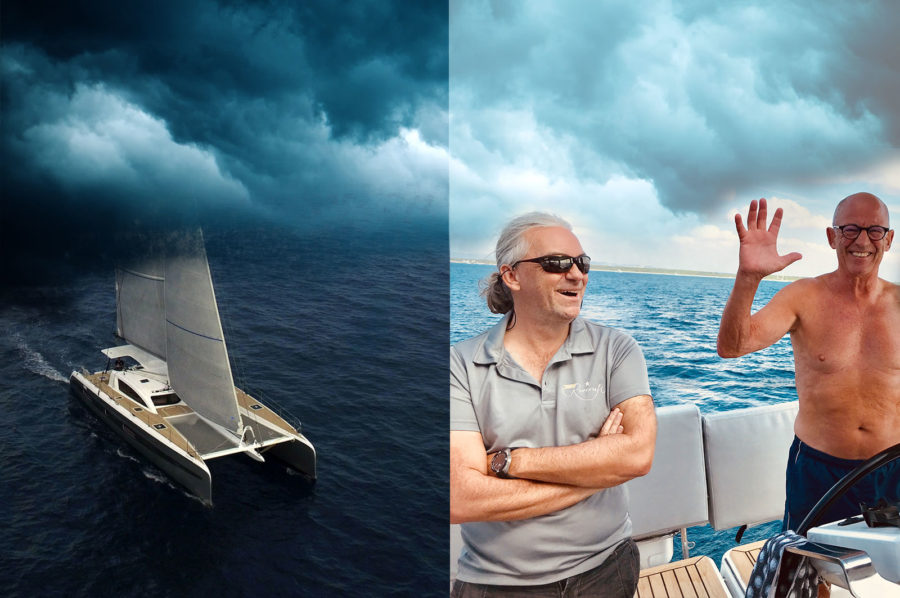 Can it be more extreme?

Foreword by Karin: Speed is your friend.
When I read Holger’s article, I thought: Well, there’s something else that needs to be explained. Let’s say the setting. The fact is that Holger is very “speed-affine”. At the end of the 80th he was a race driver and so he was karting champion in Germany. On the road he was always too slow and even surfing, skiing, even on the stand-up board he attached importance to speed.

After our Atlantic crossing and a slow year in the Caribbean, a little calmness returned to his racing heart. Sailing changed him. He loves to look out to sea for a long time. Whether we do 5 or 9 knots speed is basically irrelevant to him. For Holger sailing has a lot to do with calmness and attentiveness. He regards sailing (except for professional sailing) as a kind of meditation. And then the following happened./KB

It can’t be more different.

Anyone who owns a vessel has friends with sailing yachts. In September I had the pleasure to accompany two friends on two trips that couldn’t have been more different. The first journey went from Tunisia to France on an Outremer 5X catamaran, a new 59 foot carbon performance cat. The second trip was to sail a new 16,25 m long Hanse 548 around Mallorca – and for me back to the roots to Monohull and Hanse.

It is known that Outremer builds the X series for owners who like to arrive fast under all conditions. The cats is not only look chic, they also cope with difficult conditions. Speed comes before comfort. Hanse is probably the exact opposite, especially with the latest models, which put comfort above sailing even more than with our former Hanse 505, the previous generation.

Let’s get started. The Outremer we never sailed under 6 Bft wind, mostly at 8 Bft between 35 and 40 knots upwind, course north of Tunis and east along Sardinia and Corsica. From Cap Corse west with strong winds in continuous rain and a considerable wave downwind to La Grande Motte. The beast reached a speed of 26 knots and that happended with the 2nd reef in the mainsail. But also at the upwind courses the catamaran made around 15 knots. The wave seemed extremely short and unpleasant to me, but that was more due to our ship speed than to the Mediterranean Sea. Milk on board would have been whipped to cream. From 15 knots speed on there was also 89 db noise on the ears.

The forces on the carbon rig and hulls were spectacular, but no problem for the 5X. A boom brake (preventer) normally sized for on another ship looked as undersized as a bicycle tire on a racing car. I guess the crew is usually the weakest link on the ship. But not so with us, because the formidable crew with professional Jean Pierre Balmes and Jerome, the well experienced owner, had the thing  in the best way under control, often dripping wet.

Unfortunately, my dudness was that I had not expected such strong winds and wet sailing and had no heavy weather clothes with me. But without – nothing works, because the helmsman has no protection on the 5X and is constantly rinsed and salted. I was surprised that a ship in the 2 million plus price range assumes that the helmsman is waterproof. Frankly, I avoid the red areas on the weather charts when I’m the skipper. Not the two of them.

After 3.5 days and nights we had finished the track. A great experience, but I was happy when it was over, although speed is in my nature. My friend and professional sailor Jörg Riechers once told me before my first Atlantic Crossing: “Speed is your friend”. But 26 kn speed makes it an experience from another planet. It’s impressive to be faster than a cruise ship. But it’s very loud, the blows are hard and the comfort level drops to freezing temperatures because the technique has priority. But that’s probably what attracts the owners of the Performance Outremer. Speed over comfort.

The complete opposite was my second trip in September, one week later. Our Swiss friend Walter is the proud owner of a new Hanse 548, which has been upgraded with a lot of effort. He invited us to explore the ship together around Mallorca. Honestly, I would not have thought that I would sail a Hanse again. We had relaxed sailing weather with a maximum of 18 Kn wind (5 Bft), which the Hanse converted into 8 kn speed upwind. The sailing was completely comfortable and nut dry. My clothing problem was solved and that was relaxed holiday sailing.

Although 1.50 m shorter and 3 m narrower than the Outremer, the Hanse offers more living space on board and much more comfort. A great ship to sail close to the coast and drop anchor in bays. Beautiful and comfortable. Even in shallow winds around 6 knots, the Hanse made 4-5 knots of speed with a code 0, which I found impressing.

The Judel/Vrolijk hull design is really great again. But what Hanse designs otherwise makes the ship even less offshore capable than our old Hanse 505. The Loft-Salon is an airfield for the crew and with strong swell a job for first aiders. Bumps and bruises are guaranteed offshore. The attached handles are more suitable for drying towels than for securing the crew below deck. The standard self-propelled jib is also far too little for the almost 20 t ship, a second headsail – at least one genoa – is indispensable.

This also makes the list price of € 375,000 so ridiculous. An additional 50% for urgently needed extras is probably the absolute minimum, so that you can sail at all. For blue water sailing you need much more upgrades. The Hanse is primarily an apartment on the water. Liveaboards would still have to invest a lot more in order to get a blue water ship. But if you go for a Hanse vessel of this generation, you probably don’t want to go around the World anyway.

As different as the ships are, Outremer is the 10:0 winner when it comes to service for the owners. In my opinion, Hanse still makes the big mistake of leaving service and customer relations exclusively to their dealers. This damages the brand and prevents improvements. I made experiences with three Hanse dealers and they were all miserable in After Service and technically little competent. While at Outremer the shipyard itself exemplarily takes care of technical problems with the ships – and also wants to learn from all mistakes – Hanse shifts responsibility to the dealers and does not want any customer contact.

The Hanse dealers have a percentage with which they have to settle defects during the warranty period themselves. This reduces the motivation and if, as in my case with our old Hanse 505, there are 50 deficiency points for a new ship, one quickly encounters a certain rebelliousness. But to each his own. Maybe it’s because the Outremer boss Stephane himself is an excellent sailer with own Atlantic crossing experience with an Outremer. So he knows the offshore sailor needs very well. However these are are simply two Worlds that couldn’t be more different. / Holger Binz