Drama on the dream island

Almost 400,000 people live in Guadeloupe and I guess that almost everyone knows about the drama we experienced here. It was even reported in France. But let’s take it one step at a time.

Last week we sailed 20 nm from Les Saintes to Guadeloupe. Since our destinations are severely limited by C19 and many things are uncertain, we took the opportunity to spend more time on one of our favourite islands in the Caribbean. Guadeloupe has – with a little imagination – the shape of a butterfly. The left wing – Basse-Terre – consists of mountains, rainforest and wild nature. It is fabulously green and mountainous. The right wing is called Grand Terre and is flatter, hot and sunny. With the small islands all around, it all adds up to one of the most diverse destinations in the Caribbean. A perfect place to wait for the next Corona developments.

The Rivercafe and the Ydalir of our friends Nilla and Anders are moored in the Marina Bas-du-Fort in the capital Point-a-Pitre. We had organised a rental car for a few days and wanted to stay here for a maximum of one week. It turned out differently again.

Together with our Swedish friends we made a few tours around the island, first over the left wing of Grand-Terre. The landscape is very varied everywhere. Towards Saint Francois in the east, there are almost continuous beaches to the north and south. In the real north, in the corner of Anse Bertrand, there are few people but rocky cliffs and the crashing Atlantic waves and wind make the landscape a little wilder.

On Wednesday, we actually wanted to go together to the waterfalls of Carbet, in the southern part of Basse-Terre. There are three spectacular waterfalls, two of which can only be reached by an adventurous hike of around 2 hours. And of course they are quite remote, in the middle of the jungle.

On Wednesday night we had another blackout on the Rivercafe and needed an electrician. Nilla and Anders therefore set off alone. In the evening, it was already dark, Anders suddenly stood on our boat, accompanied by 2 policemen, completely dissolved. “I have lost Nilla,” he said, distraught. His wife Nilla had disappeared. While crossing a riverbed, she had slipped and been caught by the surf. Heavy rains had turned the normally relaxed river into a raging torrent. Nilla was gone and could no longer be found in the thick growth of the jungle. Anders had no chance to help and hurriedly made the 2-hour trek back to call for help. The search and rescue teams did not manage to find Nilla in the remaining daylight. It was also not clear whether she had survived the fall unharmed and alive. More falls followed in the riverbed, at the end of which a 110 m waterfall would have left no chance of survival. The search was ended at sunset and was to be continued the next day.

On that day, 20 people went missing in the jungle, but 17 were found the same day. Three remained missing overnight. Nilla and a 75-year-old grandfather with his 5-year-old granddaughter.

That was the waterfall (Carpet 2) Nilla had down the stream. 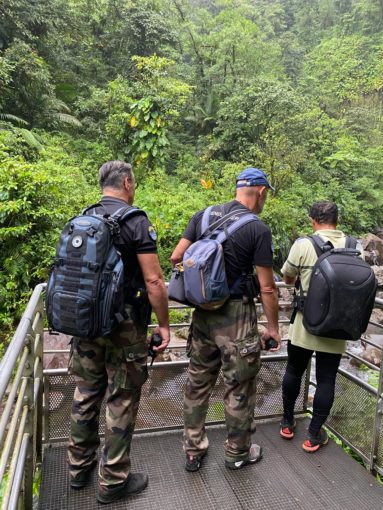 Immediately after sunrise, several squads of 30 climbers, divers, firefighters and police officers set off on the long journey into the inaccessible terrain. Anders had spent the night with us on board, between faint hope and the firm conviction that he had lost his wife. It was a dramatic night.

At 5.30 a.m. we set off together for the waterfalls, and at 6.30 a.m. the sun rose. Due to heavy fog, helicopters could not fly at first, and the current and the high water prevented the use of search dogs. The helpers used drones to search the inaccessible areas. Everything was very professional. Then the helpers found Nilla’s walking stick, at the foot of the second highest waterfall, 110 m below the water’s edge. I saw that the boys were losing colour in their faces. But surely Nilla had just lost the stick and the current had swept it over the waterfall.

We waited tensely, trying to comfort and motivate Anders. Time crept by. And then finally, at 9.30 am, a search party found Nilla on the riverbed not far from the big waterfall. Climbers and divers fought their way through the dense undergrowth to her and gave us the sign that she was alive. Injured, but alive. The brave little woman had managed to survive the fall and the night.

We learned later that after the fall Nilla was washed down two more falls of around 10 m and then all the – presumably Nordic – gods of luck were with her, because she was able to hold on to a tree trunk protruding into the water and thus save herself from the fatal fall over the big waterfall. With injuries to her arm, head and legs, Nilla pulled herself a little way to the shore. She knew that no one could look for her at night and so she motivated herself to hold on through the cold and rainy night. At daybreak she started calling again. Until the search party found her. When the rescuers finally reached her, Nilla was secured and flown by helicopter from the bush to hospital. The little 5-year old girl did not make it and was found dead. The body of the grandfather was found 4 days later at the river estuary. What a drama.

Nilla heard about the other missing persons and panicked at the hospital that the missing man could be Anders. Since our trip back to the hospital naturally took longer than Nilla’s flight, this panic only dissipated when Nilla finally saw Anders. A cinematic reunion that couldn’t have been more emotional. So no Shakespeare drama. But a drama with a happy ending.

In this crisis we all felt incredible affection and kindness. Anders and Nilla, of course, from their family and friends. But apparently the whole island had been following it. Many prayers, thoughts and affection were “unmissable”. The police, fire brigade, climbers and divers – all did a sensational job. We were very impressed and touched by how compassionate, kind and loving the people of Guadeloupe were. So the slogan “We love Guadeloupe” – that’s exactly it.

Nilla was able to leave the crowded Point-a-Pitre hospital quickly after the wounds were stitched and the injuries were treated. Anders is a doctor and will provide the best treatment Nilla can get. After a night with us on board – a cat is more accessible than a mono – the two headed for a hotel. A few days rest and drama processing is the best that can go now.

Ka and I then set off on the hike to this waterfall the next day. It was probably one of the toughest but also most beautiful hikes I’ve ever done. But certainly not for walkers. It was almost two times two hours of effort and real jungle. Sensational. If you want to really exert yourself and experience impressive nature at the same time, you should definitely hike the Carbet waterfalls. But please don’t fall off.

We will stay a few more days in Point-a-Pitre and take care of them. Would be nice to have a few more just uneventful days in Guadeloupe.

We take this opportunity to say thank to everyone being supportive. The Marina Fort-de-France, especially Anémone, for letting us stay, the incredibly firemen and gendarmes, all the climbers, divers and canoeists – and many who told us they had prayed for Nilla. Nilla is very brave, by the way. She sat in the riverbed during the prayers, never lost faith and talked to trees and crabs. /Holger Binz

5 thoughts on “Guadeloupe – almost a disaster”