Gwada and the Créoles

They are a very likeable people, the Guadeloupians and Goudeloupeuses. Except when they drive a car. It’s a kind of Caribbean martial art. When the engine is off, they gonna relax and become charming again. And even drive with you to the untraceable computer shop. Très sympa.

But there are two things that take a lot of getting used to for the common Luxembourger. Créole and créole. The first is the language, the second the food. 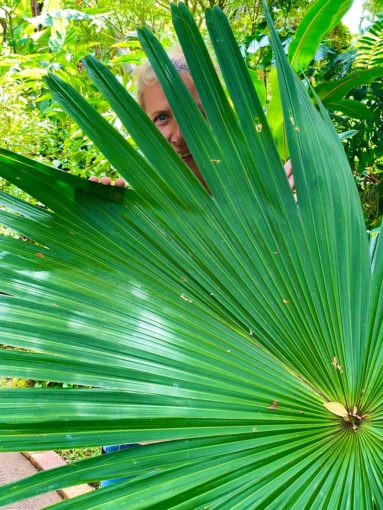 Créole is somehow based on French. But everything has to be choked off and in no case are all the syllables allowed to be pronounced. Actually, Créole is something like French in spoken language, minus 50% of the letters. And under no circumstances with clear pronunciation. If you listen carefully and the people speak a little slower for a change, you can get a rough idea of what it’s all about, e.g. the place names:

And that’s what it says on the place-name signs.

When I was a child learning French, I would have dreamt of simplifying it like that. Créole came into being during the time of slavery, when people from different countries and languages had to communicate with each other. Something like the lowest common denominator.

La cuisine créole doesn’t usually does not blow us away. It’s very similar and it gets boring quickly. Accras with crudités – a kind of deep-fried ping-pong ball, usually made of fish, scampi or chicken – seems to be a legal requirement on the menu. Often there is also a sauce/dressing that takes some getting used to, made of far too much onion.

As we do a lot on the island, we also discover unexpected surprises, e.g. in Anse Caraibe, south of Pointe Noire on the west side of the island. The “An Ba Rézen La”, Léonce’s restaurant. In Créole, this means “under the tree”. Léonce, a very friendly chef and host, grows his herbs, spices and juices in his own garden. It’s all easy and relaxed in a laid-back bay, the hummingbirds fluttering right next to the table, the pelicans and frigate birds fishing in the sea. Merci Léonce, your Créole cuisine is really delicious. 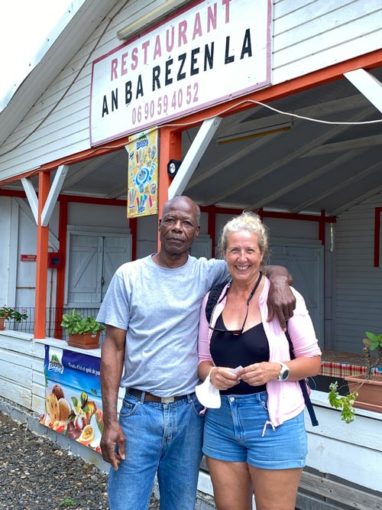 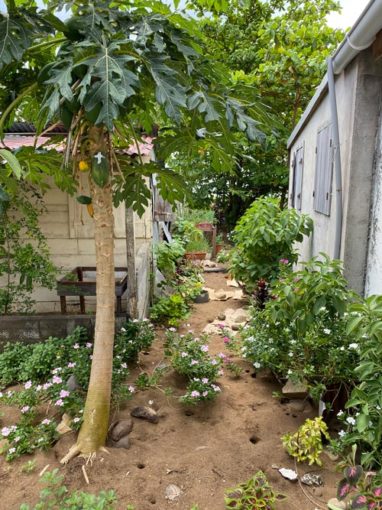 The pearls of the island

What other beauties do we want to tell you about? For example, Pointe Châteaux, the easternmost place on the mainland, where the north and east shores meet. From the north, the waves hit the rocks of Guadeloupe and La Desirade, an offshore island, on their long journey across the Atlantic. A natural spectacle. The short climb to the cross in the east rewards with a breathtaking view over the whole of Guadeloupe and the islands to the south. 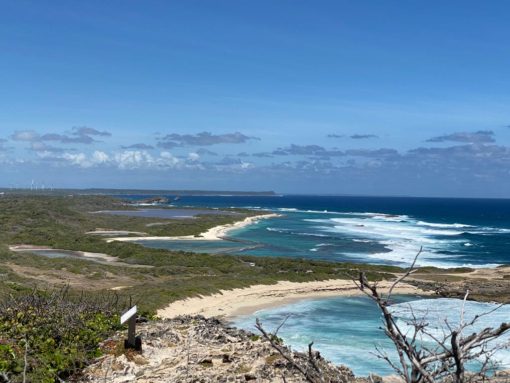 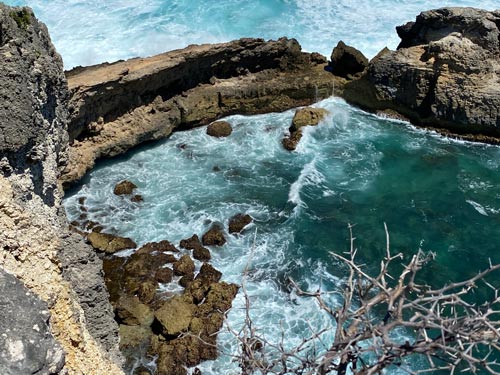 Almost 80 km away, In Basse-Terre – the western part of the island – lies the dream of all hikers. A fantastic rainforest in the mountains. You can hike there for days, with and without waterfalls, in different degrees of difficulty. The “Traverse”, is the road, runs high above the mountains across the island. A good access to the hiking trails.

Next to the village of Deshaies, in the north of Bassse-Terre, is, in our opinion, one of the most beautiful gardens, the Jardin Botanique Deshaies. The french comedian Coluche had his house here and anyone who likes can rent it. And if you’re already there in the north, a somewhat wilder swim stop is also worthwhile. I think “Les Perles” is the most beautiful beach on the island, and a little further south, “Grande Anse” is also quite nice. Both beaches can get pretty wild, unlike the sheltered south-eastern beaches of St Anne and St Francois, which are very shallow and not undulating. 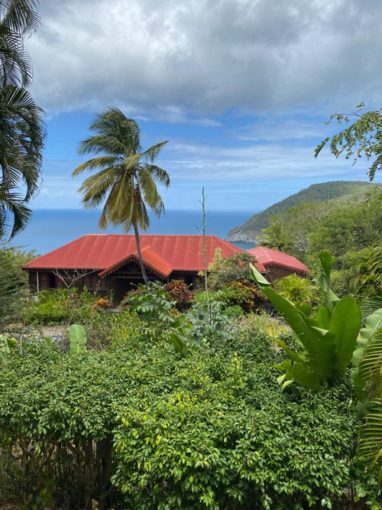 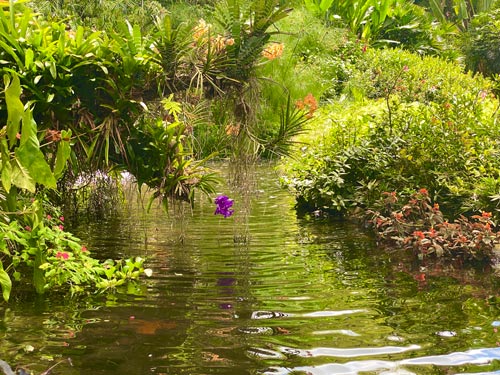 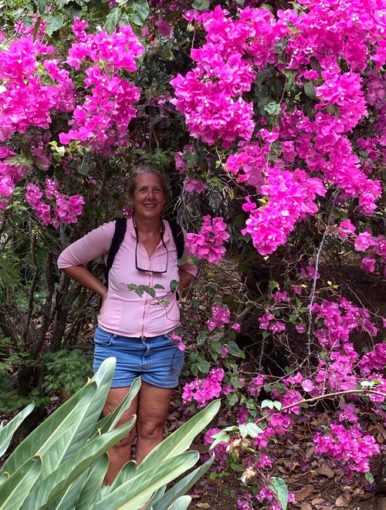 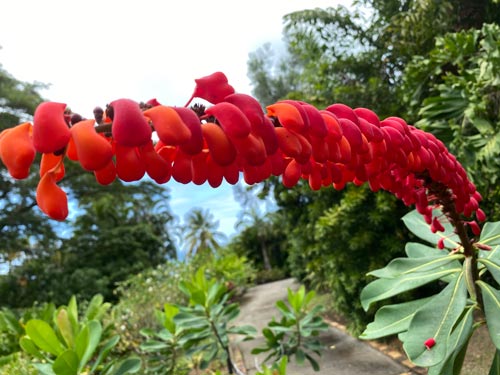 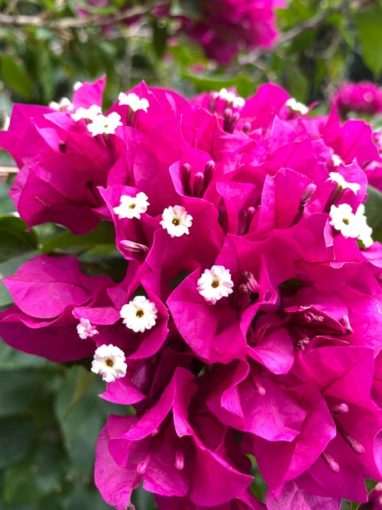 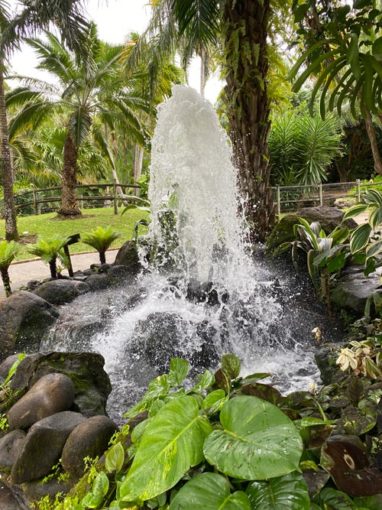 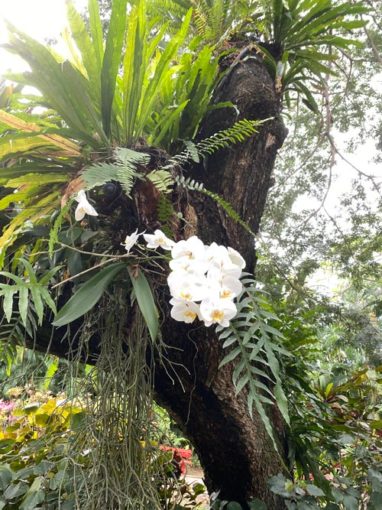 Last week both of our diesel engine starter batteries were replaced and that takes care of another tick on the problem list.

We will stay in and around Guadeloupe until early May and will not go further north this season. We have ordered the tripling of our solar panel and from May onwards we will no longer need any external energy for the water maker, washing machine and diving compressor, let alone a diesel generator. Our Independence day ahead. /Holger Binz

2 thoughts on “The Pearls of Guadeloupe”