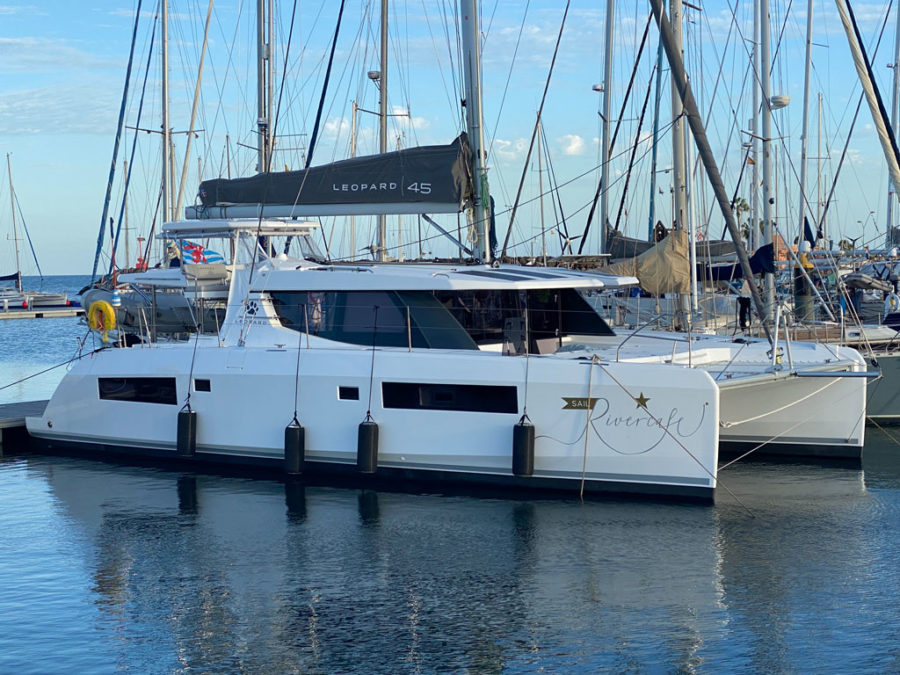 So many “first times”

So that was it, our real, own maiden voyage. At 55 nm, only about one hundredth of the maiden voyage from Cape Town, which isn’t considered as such as Ka and I were not on board. At 7.30 a.m. – it was still pitch dark – we left Santa Cruz de Tenerife and danced on the waves into the sunrise towards Gran Canaria to the east. Our PredictWind weather had predicted 13 to max 16 kn wind from N. This means that we would have sailed 70 % of the distance on a reach wind, stirred up by 1.70 m waves. Sounds like a nice sailing day. On board were our mast broken friends Helena and Robert, who also wanted to go to Gran Canaria.

The reality of the day was then 24 kn wind, rarely under 20, completely from the east and therefore on the nose, so always against. Exactly the course that cats like least. And neither did I. And for the extra pleasure, then an extra meter of wave on top. Perfect weather to stay in bed. PredictWind – you may do better than that.

When we arrived at 5.30 p.m. in the harbour, a 16 to catamaran had to be docked. Somehow. As far as possible without damage. We had agreed that I should go for the first mooring. For a mono sailor it is quite unusual that you should keep your hands off the steering wheel while mooring. Catamarans are docked with the help of the two engines only. Theory so far clear, time for practice.

The friendly marineros wanted to give me additional practice opportunity and then made two docking out of it. First at the starboard of the marina jetty with a distance of 2 meters to the next ship and one hour later, when our jetty was disinfected, then stern back to our final berth. With the extensive experience of at least two practiced cat-dockers in my life – supported by Gary, who was not there this time – I tried hard to stay cool and confident. All went well, no damage or injuries. Maneuver beer deserved.

After the crossing I knew again why the Canary Islands would never make it into the sailing favorite charts. And certainly not be a favourite charter area. The seven islands – and two mini islands – are all very beautiful and varied. We can’t decide which one is our favourite, fortunately we don’t have to. But especially La Gomera and La Palma are our favourites. El Hiero and Tenerife are also great – ok, Lanzarote, Fuerteventura and Gran Canaria are also beautiful – every island has something.

The sailing between the islands can be rough. Nothing for once a year charter sailors. Rather something for my sailing mate and name colleague Holger, who otherwise prefers Scotland or the Irish Sea. The Canaries are warmer, but often just as rough. It is the Atlantic. Usually the wind from northerly directions dominates, mostly around 5+ Beaufort. And the waves rarely run below 1.50 m, with lots of air up. Then there are the “acceleration zones”, the wind jets between the islands. There the wind is pressed between the islands and becomes much stronger. As a compensation there is relative calm mostly south of the islands in the lee of the wind. The southern parts of the islands are also usually the ones with the sunnier weather and tourist locations. It is definitely varied and sometimes “character building”. Experience is not disturbing, but even then, you should preferably sail the islands from east to west. If you allow yourself that, you should charter for at least 2 weeks in my opinion.

Weather is a matter of taste of course. But the real disadvantage of the Canary Islands IMHO is that due to the volcanic cone structure of the islands there are only few anchorages. On the coasts the sea floor is often steep and the depth gauge shows nothing after a short distance. This means that you normally sail from marina to marina. This is not bad at all, because a visit to Arrecife in Lanzerote, San Sebastian in La Gomera, Santa Cruz de Tenerife, Santa Cruz de la Palma or even Las Palmas is worthwhile.

For those who can handle it, there are a few charter possibilities. The big players Mooring/Sunsail and Dream Yacht have no bases on the islands. But there are a few smaller companies, e.g. Lava Charter in Lanzarote.

For long distance sailors on their way from Europe to the Caribbean, no island designer could have placed the Canaries better. They are perfectly located on the way south. Ideal to prepare a ship for a long crossing are Las Palmas de Gran Canaria and Santa Cruz de Tenerife. The other islands have a manageable supply of outfitters and craftsmen and can’t keep up with them. But they are still worthwhile stops for a rest and some distraction.

The Canary Islands have a wonderful climate all year round and actually everything you need for a pleasant life. Let’s see, sometime we have to go ashore again / Holger Binz