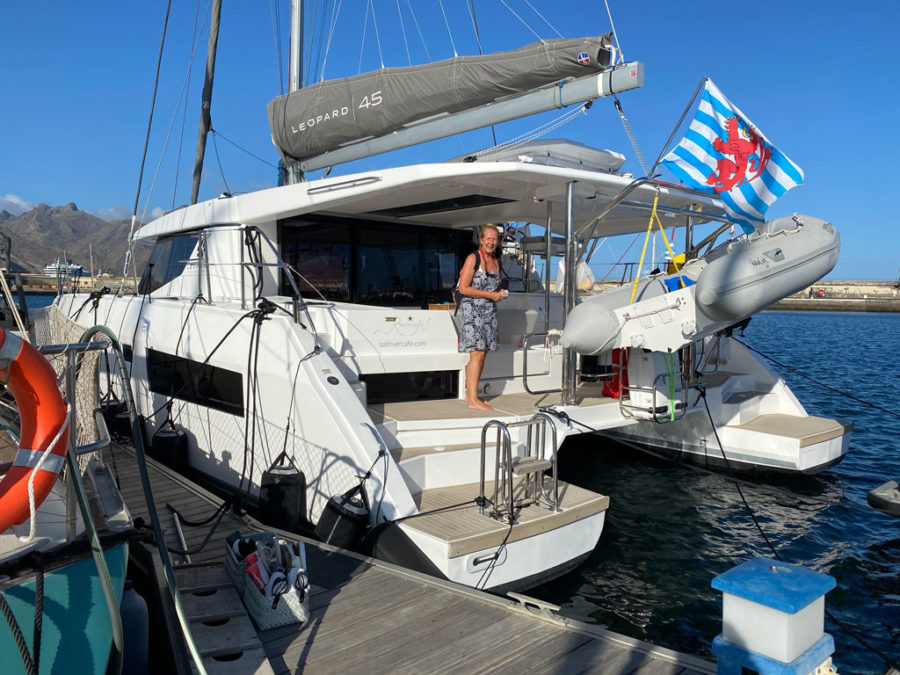 We have been on Tenerife for almost 3 months now. We have waited two months for the Rivercafe and the last 3 weeks we have made it ready to sail and our new home. After this weekend we will leave Tenerife. For Ka and me the 55 nm to Las Palmas de Gran Canaria will be something like our maiden voyage, even though our vessel has already almost 6.000 nm under her hull and will surely see it differently.

The waiting has already taken its toll on us, but we still had a great time and were lucky enough to live in the luxurious home of our friends Ruth and Gibbes. Of course, we have seen a lot of the island. From the warm, always sunny south – the major place for tourists. From the villages in the southwest, often in or above the clouds. And of course there is the “Teide”, Spain’s highest mountain. The drive through the lava landscape of the nature reserve alone is spectacular and worth the one hour journey. The green north-west is worth seeing and of course the often cloudy north-northeast, with the nice capital Santa Cruz. The marina in Santa Cruz is located 3 minutes walk from the city center and offers a lot of shops, nice bars and delicious restaurants. A good place for yachties.

We went swimming and diving – and every day in shorts. Plus the nice canary people and they can cook! Does not sound like a bad time at all.

With our plans to visit some other islands we were too optimistic. We won’t have time to sail more islands. We were looking forward to see La Gomera and La Palma again, but that’s the sailing life. Always a change in plans.

Since today the Prio 1 works on board are done and in the feeling that the Rivercafe is now sailing reliably, we can now sleep in the morning. On this cat it sleeps very well. Now we can also report a little bit about our experiences with the quality of our Leopard Cat. Pleasing: our list of defects was by far much shorter than on our last Hanse 505, even though the Leopard is much more complex and equipped with more technology. The finishing quality is very good, nothing creaks or rattles. The systems run stable and the power supply is better than expected.

Leopard has forgotten a few things, apparently a few mechanics wanted to go home early on Fridays. Wrong wiring for Watermaker and AC, missing locks and lights, something like that. Actually we only had one serious issue and that was the winches. They were not sufficiently laminated in and were moving, snapping back. Pretty dangerous.

The complaint and warrenty handling with Leopard was a bit tough in the beginning, but after it had settled in, uncomplicated. We gave all jobs to craftsmen in Santa Cruz and the guys did a great job. So everything looks good at the moment. Especially considering that our cat has already been halfway around the world and across the South Atlantic. Our delivery crew was full of praise for the sailing characteristics. The fact that the fabulous captain Gary did the handover in Cape Town and a lot of work here as well, probably makes the whole procedure not really representative.

So now we are finally moving on. From next week we will be in Gran Canaria, the third largest Canary Island, but with the largest city, Las Palmas. There the few remaining ships of the ARC+ and ARC slowly gather. For us it will be nice to see a little bit of the island, especially since there are not many tourists there.

Ka wants to fly from there to Germany for the birthday of our super sweet granddaughter Hannah, who will be 5 years old and can’t decide between her admirers. What a cutie she is. We are curious if C19 and the German Minister of Health will allow this.

On our 8-9 hours trip new friends will accompany us. Helena from South Africa and Robert from Australia wanted to sail to Gran Canaria with their ship last week and had to turn back after 6 nm with mast breakage. It was a sad sight when the Spanish Coastal Rescue towed the two back into port. Now the two of them are finally coming over, even if the new mast still needs a few weeks / Holger Binz