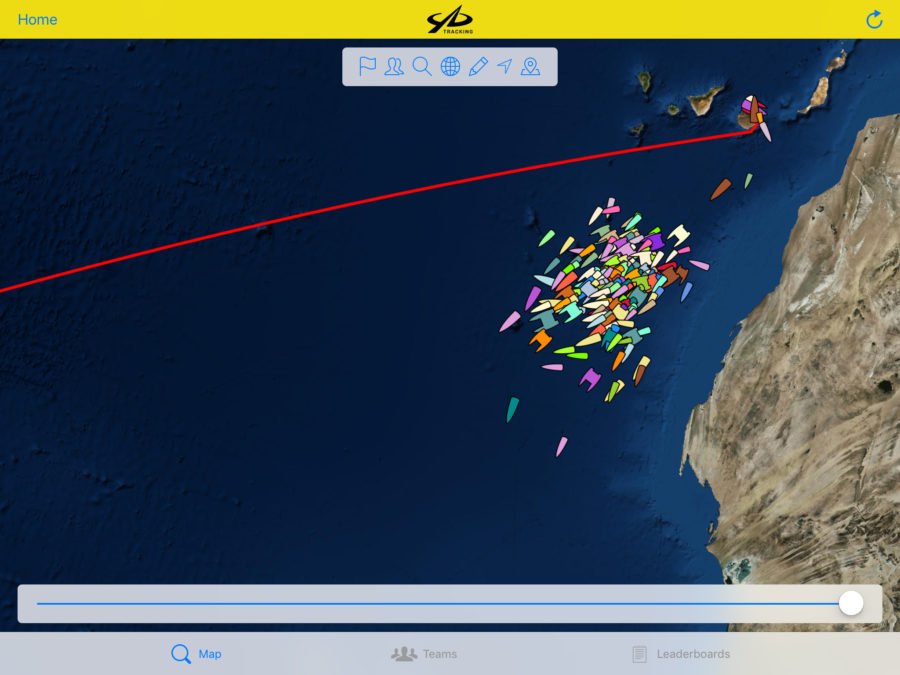 Sailing across the Atlantic – alone or with a rally ?

In 1986, blue-water guru Jimmy Cornell organized the first ARC – the Atlantic Rally for Cruisers. He hit a nerve with it and laid the foundations for the largest and to date incredibly successful Atlantic Rally, which heads every November from Las Palmas (Gran Canaria) to Rodney Bay in St. Lucia. More than 200 ships cross the Atlantic each year with this rally.

Jimmy Cornell sold the ARC to the World Cruising Club and spent a few years organizing the smaller Odyssey Rallies. Including in my opinion the most thrilling rally with the “Barbados 50”, which took place only once in 2016. I had the pleasure of sailing this unique event. Jimmy ended his career as an organizer of sailing rallies in 2017, leaving a gap for the sailors who want to sail in rallies but do not want to be part of a mega event.

In addition to the ARC there is another transatlantic rally, the new and smaller “Rally Iles du Soleil”, with start on the beautiful Canary Island of La Palma and the finish in Marie Galante, a small island off Guadeloupe. Both are great destinations. But more demanding for transatlantic sailors, because both do not have the good infrastructure for equipment and repairs of yachts, such as Gran Canaria or St. Lucia.

What makes the incredible attractiveness of the ARC, luring over 200 sailing vessels every year? Are the sailors too cowardly to go alone across the Atlantic?

Let us not beat about the bush. For a real sailor, the Atlantic crossing is the ultimate goal, best as a skipper. But many lack the courage and that is also completely understandable, because one goes into dangers and has to master real challenges. The Atlantic Ocean is not the Baltic Sea and 2-3 weeks alone on this huge ocean already needs “cojones”. The Spanish port of Almerimar tells stories of former brave people who wanted to go and never made it.

Sailing a rally gives a nice tailwind to finally untie the lines. It’s just a good idea for Atlantic rookies, because you get valuable support. If you wisely doubt, talks with other sailors help. Who e.g. one who sails with the ARC, has a bit more security than a loner. All sailors receive position trackers, so everybody can track your position, course and speed. Even those who stayed at home can be online with the app YB Races. That gives at least a better feeling. If you have crashed 200 nm off the coast, you can not expect a rescue from a Coast Guard, they will not get that far. Only other ships remain. And thats the huge advantage of the ARC: there are other yachts at sea that can be reached and redirected by the rally control. A superplus for a rally.

Another plus is the preparation program. Participants can gain or refresh knowledge in seminars and simply become better sailors. It also points to aspects that one would not have thought of, in the endless processing of getting through the checklists. For example, in Lanzarote, I had a chafe protection fitted to the mainsail, which I did not have on the list. It is also very reassuring that every ship is inspected before take-off. Only actually seaworthy ships are allowed to sail with the ARC. So you get an inspection of experts, a very reassuring feeling for skipper and crew.

My personal highlight is the excellent ARC manual that every ship receives. It answers many questions that you would not even have asked. The book is a treasure trove of collected practical knowledge – the manual alone would be worth almost the participation. In short, the preparation is at a level that you can not reach as a normal-sailing loner.

Among the pros of a rally, also counts the community of sailors. There are a few parties to get to know each other, plenty of exchange and support of every kind. After all, everyone – fortunately not figuratively – is in the same boat and on the same wavelength. One understands oneself and the sympathy is clarified quickly, one way or another. The rally management ensures a befitting celebration on departure and arrival. Goose bumps inclusive. Some real friendships have been created in our Barbados 50 Rally. Some ships still sail with each other two years later. We, as returnees, set to meet other crews, who are also back on land. From the circle of friends of the rally there are always requests for sailing. We too, on our next Atlantic Crossing from Cape Town to the Caribbean, we will have the pleasure to have two wonderful B50 friends with us.

The shared adventures and mastered situations weld together. The word friendship actually has a meaning, unlike in our rural or social media everyday life. If an acquaintance you’ve known for only a few weeks, without hesitation, selflessly jumps off a ship in the middle of the Atlantic to swim to your vessel because there is a serious problem on board, then a true friendship has come up. The same term ashamed of everyday life.

Not all of the approximately 2,000 annual Atlantic crossers go with the ARC and thats for some reasons. First, this is the Las Palmas-St. Lucia (or more recently St. Vincent) course only. If you have another way in front of the bow, you will fall out. Money is also an issue. Joining the ARC costs about 1,500-2,000 € participation fee. It scares some, especially the more experienced. And contrary to the usual image, sailors are not necessarily rich. A considerable number is traveling on a very tight budget.

The third point to stay away is the size of the event. You can find it scary when 200 vessels are gathered in one event. At least in Las Palmas the whole horde is gathered. In St. Lucia, the first ones are long gone when the next arrive. Blue water sailing is actually something for individualists. I find it slightly contradictory when sailing is massively organized. But once you’ve left the harbor in Las Palmas, each ship is alone again soon and as a microcosm in the vast Atlantic only on its own. In this respect, the mass organization of the ARC can not be compared to a package holiday or cruise ship vacation and gets extenuating circumstances.

The participants of the ARC are only partially “real” sailors. Crossing is the event for many crewmembers and they fly home after a year’s holiday on board. That was completely different with the Barbados 50, there was no sailing tourism with paying guests. The ships were all at sea for at least a whole season, some open end and around the world.

For us it was perfect that we sailed our Atlantic maiden voyage with the Barbados 50. When we found the tender, we did not have to think twice. We would decide it again at any time. A total of 35 ships, 9 destinations and a cool mix of one-year sailors and liveaboards – that was the perfect rally for us. If I sailed again from Europe across the Atlantic today, the “Iles du Soleil” as a smaller rally would probably be my first choice.

Unfortunately, this will not be possible for our next crossing because there is no rally from South Africa to the Caribbean, to my knowledge. Our second crossing gets twice as wide as the first at 5,700 nm. But with our experience of the first crossing, with additional experienced crew and friends on board and the great ARC manual, it is likely to be easier and more pleasing. I can not wait for our catamaran to be built.
/ HB