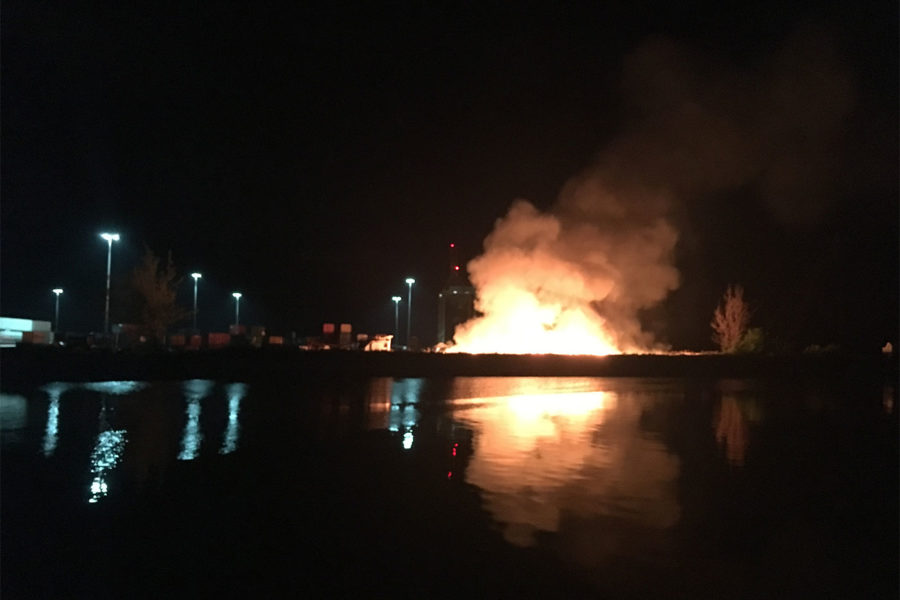 The cruise industry is booming – and struggling with its reputation as an environmental polluter. Rightly so. The marketing departments are bringing out well-sounding phrases about environmental commitment, but this is more a show than a reality. In Barbados, we witnessed a cruise ship-made environmental sweep.

Lets start with a confession: I made 15 cruises prior to my blue-water life and I was convinced that this would not burden the environment too much. An embarrassing mistake.

We had just crossed the Atlantic with our sailing vessel and were on duty clearance in the Shallow Draft of Bridgetown, the capital of Barbados. In the middle of the night we were awakened by a strange light, flying soot, unusual sounds and a colossal stench. We stormed out of the ship and saw a blazing fire in the harbor basin between us and the cruise terminal. The sky was bright as daylight. I thought there was a vessel burning and called the police – I did not know the number of the fire department. They stayed cool: fire in the harbor? Northwest of the Shallow Draft? Nope, all right, is normal. Don’t panic. There, only the garbage of the cruise ships would be burned, that’s what they do. And he hung up.

Barbados is justifiably popular with crusaders and I’ve already seen four cruise ships mooring there at the same time. On board, guests learn that garbage is being separated, disposed of on land and the company meets the highest environmental standards. The guests then feel like environmentalists and everything is fine. The standards are then probably on the level of a limbo rod. In fact, the garbage is indeed only burned – sorry, disposed of – when the ships are gone. The day before the fire, several Cruise Companies were in the harbor. Whose garbage was burned could not be assigned. I am completely perplexed how an industry can do so stupid to ruin the world and its own future. Especially in the tourism industry, the context can only be ignored under heavy drugs. Equipping the currently 314 cruise ships in the World with soot filters are peanuts to the industry’s sales. This exhaust is as easy to avoid as a “F” in social sciences. And of course the companies also have to check if their crap is disposed of properly. I can already see the press officers of Royal Caribbean, Princess, Carnival and NCL on the mic stand and report dismayed that they are “very disappointed” by their local partners, knowing nothing about the actual events.

How about an international award for the most backward and dumbest management performance? The cruising industry would be in the top 10. Traveling the World clean is not quantum physics, it can be organized even by mediocre talented managers. Even greed as a motive is evidence of stupidity, because “clean” brings more yield at the long end. I do not even have anything against the industry. Only against stupid people who ignore simple connections.

On longer passages I have often sparked with passing cruise ships and benefited from their excellent weather reports. In heavy weather we were even notified by an NCL ship, if everything on board was ok. Very sympathic. And I would be lying if I did not prefer to spend one or two stormy nights at the bar or in the comfy bed of a cruiser, instead of getting wet and shaken at the helm. Sure, when I see the landing, I change course to escape the tourist hordes. A place becomes quirky when 5 cruise ships drop 10,000 tourists, which may not all be prepared for the place visited. In St. Thomas on the USVI they celebrate at the end of a cruise season. I’m not sure if the revenue will be celebrated or the next 5 months ahead with less imposing tourists purchasing Swiss imported watches in the Caribbean.

However we incidentally separate our garbage on board and try as little as possible to buy plastic. Even if we see what garbage mountains are burned, we collect every piece of plastic while snorkeling. We might get it done better, but we are already on the right track./HB