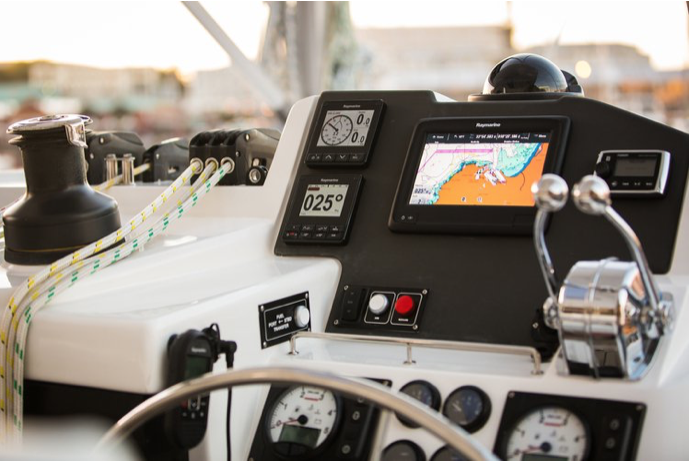 Hints from a Leopard professional

It`s an never-ending discussion. Depending on the interests of the one will say “I enjoy life on board – 5.5 or a good 7 knots of speed – ​​I do not care.” For the more ambitious among us, the topic is certainly of interest. Does sailing trim on a seagoing cat matter at all? Certainly – that’s why our fixed roof over the helm is equipped with a window providing the helmsmen a direct view of the sails. And of course, the genoa is delivered with tell-tales.

La Grande Motte. Sea trail after the Boatshow at about 20 knots of wind. I concentrate and have the Leopard 45 after a few minutes at a little below 40 degrees at the wind at 9 knots. Of course, the conversation with the co-sailing customers are of top priority – a minute less focussed and suddenly we are below 8 knots. Obviously, it’s worth taking a first general look at the function of the sails and their perfect trim. First question where does the wind come from – that is of course essential. The real wind is always blowing on board – but thats not true. The so-called apparent wind is relevant, which is composed of the true wind and the airstream. That’s important. But more on that later.

As long as the wind blows more broad reach than abeam (that means more from the back than from the side), we sail by propulsion. The wind is literally pushing us away. That’s the easy sailing trim. The goal is to slack the main sail as much as possible in order to maximize the area exposed to the wind.  Astonishingly one sees sailing vessels on a broad reach often enough with by far too hauled sails, much too dense sheet ropes on the way. Result, the boats do not sail properly. Sometimes it gets even tighter in the mistaken belief that sheet sails provides speed. Not infrequently the opposite is the case. Let’s just let the wind push us.

If the wind comes more in a close reach than abeam (that means more from the front than the side), things get more interesting. First, lets remember how a sail works. After all, in principle it is amazing that we can supposedly sail against the wind direction. How does that work? When the wind flows from the front into a sail, the sail is nothing but a wing on the plane. The result is a current in the sail with a suction effect on the side facing away from the wind (like in an airplane – there this pull holds the plane in the air).

This suction effect is strongest in the front of the sails and literally pulls us downwind. And here is the beef: while a stall on the wing is very clearly noticeable in an airplane, nothing happens at first in a sail – except that the vessel is significantly slower. In addition, the stall is caused by too tight sails, which is optically hard to mention. Everything looks supposedly wonderful, but somehow the ship is not performing.

One or the other may have experienced that before. With some sailing experience you can literally feel it. So how do you proceed now? It is important to always start the trim with the headsail. If that’s already too tight, the mainsail is only wind-choppy. So we first haul up the headsail (pull the sheet ropes) until nothing shivers (flutters). After that, we’ll start sheeting (loosen the ropes) out the sheet ropes again until the luff (the front of the sail) begins to get nervous. Now haul up a little bit quite the luff again, so the trim is optimal.

As you have the pleasure to own tell-tales in your sail (so have Leopard cats), it’s even easier. If the ribbons are perfectly horizontal on the inside and outside of the sail, everything is fine. If the tell-tales swirls on the side facing away from the wind, the sail is too tight and we have a slacken the sheet ropes. But if the tell-tales to the windward side are swirling, the sail is a bit too open. That’s going to be accompanied with a nervous luff.

Now that the foresail fits, the same procedure starts with the mainsail. Important not to be hesitant at slacking the mainsail. For many it seems to be a contradiction to sail the mainsheet faster while slacking the sheet ropes. Feels funny indeed – accelerating by a looser sheet. But it is really like that.

Now that everything is well trimmed, the sails are getting suddenly restless again. Why is that? The yacht has picked up more speed thanks to our nice trim and thus produces more airstream and this will change the game again. Of course, this one always comes from the front, mixes with the true wind and reinforces it.

As a result, the so-called apparent wind, which usually comes more and more from the front compared to the true wind. So more speed, more airstream from the front that changes the relevant trim ankle. Therefore, our sails are now too wide open and we have to sheet them until peace has returned. If you do this consistently and concentrated, you can certainly accelerate by using the airstream. But this requires a very concentrated rowing.

Since you cannot sail straight against the wind with a sailing yacht, the whole strategy has its limits, of course. Anyone who sails close on the reach or upwind (maximum possible angle in the wind direction) may at some point not be able to catch up with the sails (please leave a “remaining belly” / profile in the trim just in light wind). Thats where the responsibility for the sailing trim in good hands of the helmsman. He/she can haul up (turn the boat downwind) until the sails on the luff start to get restless.

After that drop a bit (turn the boat out of the wind) until the sails are calm again. With these rudder movements you can drive the yacht with optimal feathering exactly “on the wind edge”. Now keep the rudder movements as small as possible (under regatta yachts the rudder is sometimes called “brake” for fun) and you will see how the yacht gains momentum.

However is this burden really necessary on a blue water catamaran? Not really. But if you enjoy sailing the right way, you will be delighted to have an offshore cat which is sensitive to all these topics despite his unlimited seaworthiness. That’s why at Leopard Catamarans we drive an overlapping Genoa, stepped hulls that generate a narrow underwater vessel with much better responsiveness, a rig with good sail-carrying capacity and a reasonably sized steering gear. The Leopard Catamarans are real sailboats. / Christoph Barth, Leopard Catamarans