The end of the season

Wednesday morning the time had come to leave our new favorite place Canouan. Along the elegant harbor exit we set course for Carriacou, the northernmost island of Grenada, our last stop before the final destination St. Georges.

We set the 19 nm short course through the narrow channel of the Tobago Keys, with countless reefs and islets. Sometimes only a seam of palm trees passed us, the matching island just above the water surface. Unfortunately we can’t impress you with spectacular photos. The weather was just too bad. No sun and dense gray. Next time.

After the Tobago Keys we sailed past Union Island, the last SVG island. We said goodbye with “Turtle Sex”. In fact, two huge sea turtles were floating next to us, tightly embraced for the sake of their offspring. Of course, we let the two lovers go about their business undisturbed. Impressive to see what’s possible in quite a swell with hundreds of kilos on the back. 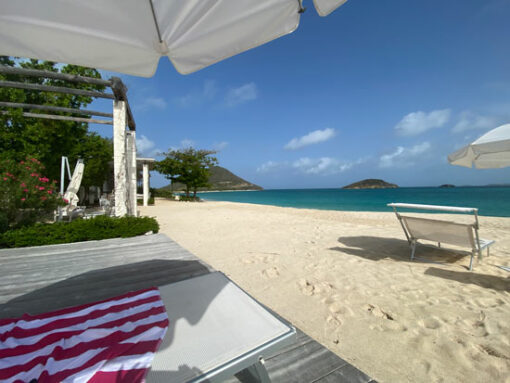 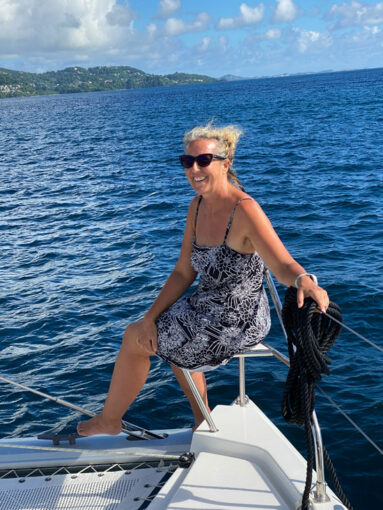 Then it was time to change the courtesy flag. For the last time this season. St. Vincent down, Grenada up – including the yellow quarantine flag. It is a nice tradition and sign of respect that vessels place a small flag of the visited country under the starboard spreader. We have a remarkably large supply of such flags on board.

Just off Carriacou, we received a delightful call on the radio. Our dear friend Rick was sailing his beautiful High Spirits the same route with the same destination in Port Louis.We last met in the Virgin Islands in 2017. He saw us on the AIS and that puts the first date in Grenada. Cant wait to see this lovely guy.

The plan was to do the required Grenada PCR test in Tyrell Bay in Carriacou (810 ECD or €270) and then to clear in to Grenada afterwards. The previous PCR test was just two days old, but from St. Vincent. What a rip-off, what an administrative frenzy. Online registration, mail documents, online payment, arrival mails. We have reached now 3.000 Euros for PCR tests in this season.

In the bay we then called Port Authority and they instructed us to anchor in the unauthorized anchorage area of the bay, formerly known as the protection zone. This is also a C19 victim. A difficult anchorage, where 8 other vessels were already waiting. All of them needed several anchor attempts until the chain held.

PCR tests are done here only on Mondays, Wednesdays and Fridays, the results take at least 2 days. Even vaccinated people can be in quarantine for up to 5 days if things go badly.

By radio we exchanged with other sailors. Some were already lying in the bay for days without anything happening. With others it went more briskly, so also with us. After two hours we were ordered by radio to the PCR test ashore. Next to a container the Pre-Health-Clearance took place, in the wind we could hardly keep all papers together.

Appearance of the sadist

And then the worst moment. We met the most unpleasant person in the Caribbean. Appearance of the sadist: Nurse Mengele. A nurse, who must have been from hell, approached us extremely bad tempered. Again paperwork, but at a dyslexic pace. Then the test. Pure pain. No, C19 does not need a brain swab. She probably didn’t know that. Or maybe….?

Ka couldn’t see out of one eye after the test. This f****** b**** didn’t care: just said contemptuously that’s how it is when you travel. Fortunately, among the waiting fellow sailors was a doctor who helped Karin.

My test was also painful with headaches the rest of the day. I guess she had fun. So dear sailors: in no case check in Tyrell Bay as long as this sadist is still on the job. Hopefully not for much longer, because I will take care of the “lady” at the Health Authorities.

After the test we had to return to Rivercafe to wait for the results. It went very fast, because on Friday later morning we got the radio call that our test was ready. We immediately went to Customs and Immigration to officially clear into Grenada. Shortly after we pulled up the anchor and made the last 32 nm to Grenada.

This was one of the best sailing days of the season, at least most of it. We started with sunshine and 4-5 Bft. We ran 7-8 knots with 16-18 knots of wind. “Dreamy” is what our Berlin friend Frank would say. That lasted about until we reached the active underwater volcano, which is north of Grenada. You can’t see any of it, but the seabed rises from 1,000 to 190 meters. So this guy has been very busy. Good news for real estate investors: In a few years there will be a new island. From there a reefing orgy started again, with wind between 5 and 28 kn wind within a few minutes. And so the season ended in the bay of St. Georges as it presented itself the whole year, with 30 kn of wind.

One last docking in Port Louis Marina and the season came to an end. We are docked right next to Norwegian sailing friends and also a few other buddies are here. It is much more international here than in the more northern islands. The marina is nice and we still have almost 3 weeks to get to know the island. And just in time, a low pressure area coming from Africa with hurricane potential moves towards the Caribbean. But I will write about that another time. Now we shift down a few gears and enjoy normal life – a kind off. / Holger Binz

2 thoughts on “St. Vincent to Grenada”