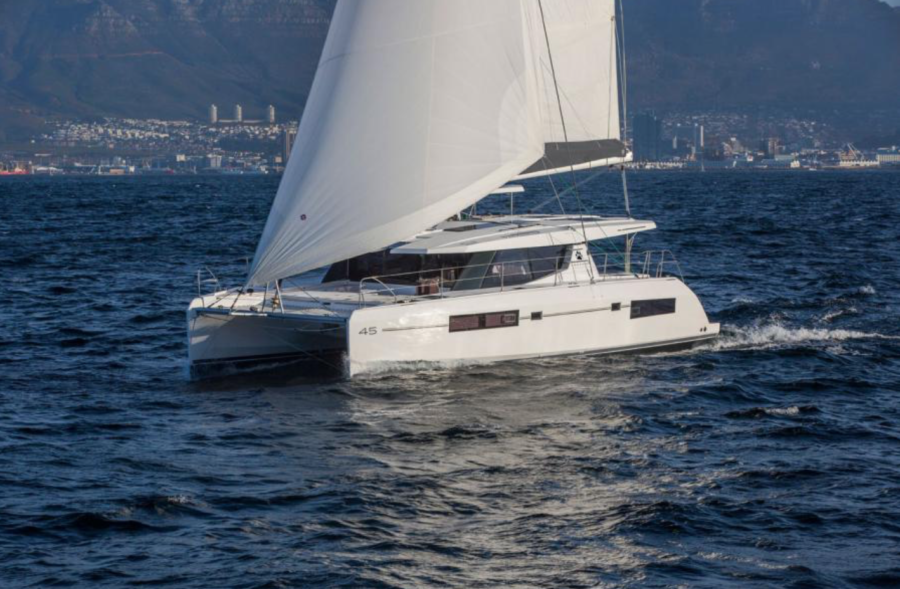 The new “Rivercafe” will be a Leopard 45.

After 6 months of research, a few trips and a few pounds of coffee, we knew what the right boat was for both of us. Our requirements were simple. We usually sail the two of us only, so the ship has to be short handed. Not too big for cleaning and maintenance, not too small for speed and comfort. So + – 45 ft of size, comfortable and suitable for offshore sailing, in no way a fly bridge. The design should be open and airy, with plenty of natural light. And finally we weight comfort over speed.

I reduced the first long list of 20 manufacturers to all with mini quantities, delivery in Asia or Australia, those that did not fit our requirements and those that were unsympathetic to me. The rest was balanced by comfort, speed, price, service and place of delivery. And then came the communicative part: talking a lot, very much with experts. I mean real experts and not online babblers. I have to confess that our list was empty in between. A clear sign to consider the priorities.

Leopard was our favourite ship concept from the beginning. We liked the bow lounge idea. But delivery in Cape Town? Not so cool. A 5,700 nm maiden voyage is already fierce for a maid. We would rather have sailed from Europe to the Caribbean, across the Canaries to the west.

So best chances for Fountain Pajot, Lagoon, Bali and Outremer, with geek Nautitech. The Outremer – by far the fastest in the field – dropped out because we put comfort above speed. Wide bed, large bath, larger cockpit and more outdoor space beat speed and chic hull design. I liked her, a cool vessel but it did not fit our plan. There were only five left.

The Lagoon45 was actually just a mandatory check without much affection. The slowest in the field, old fashioned and not on the level of other candidates. Neither in the design nor in the technical implementation. We did not want to wait for the overdue launch of the new 46s. And she was out. Nautitech was out too, the solution of the two helm solution was not my case as well as the rest of the vessel. Being owned by Bavaria was not supportive too. Only three left.

Bali 4.5 was the next candidate to be cancelled. The massive bow construction was rated doubtful by the professionals. The interior design was great, the perfect inshore boat, but somehow you have to get to the next bay offshore. Nothing for us, but we needed something for real oceans. So still Fountain Pajot and Leopard left. FP had the weakest traders, really incompetent and unreliable. FP had recently deleted the 44 ft. which we were interested in and replaced it with a new 42er model. Actually she was too small but very chic and much cheaper than the Leopard 45. However finally we saw the new Fountain Pajot 45 Elba in Cannes and we felt comfortable that we did not consider FP.

Well and then the discussions and research. Unequivocal feedback: Fountain Pajot cannot top Leopard’s quality. Even online, I could not find anything bad about Leopard, but much about FP. Someone who builds 250 ships a year and does not manage to build a hater base has to do many things right.

Another huge bonus for Leopard: the owner THL Marine also enjoys the ownership of Moorings / Sunsail. All cat’s of the charter giant are built by Leopard. For the owners, this means: reliable, low-maintenance systems, high quality of development and quick response to deficiencies, because charterfleet feeds permanent feedback. Owner ships in owner’s version have a high demand, Leopards are built on longevity and keep the value better than FP. And the Joker: you do not buy from the dealer, but directly from THL Marine, which is safer for the contract.

Enough of the theory, time for a sea trial. Getting out in La Grande Motte with the Leopard 45. 10-12 knots of wind, 1-2 ft wave. We went out with Lagoon 45, the Bali 4.5 and a Fountain Pajot 47. I could not believe it: Cat sailing is fun. The Leo was agile and easy to sail. All pods and lines are running to the helm and are actually single-handed sailing. Incidentally, I found the line guide to be best solved by Leo, like so many other solutions too. And the comparison to the other three ships? Dominant. None could nearly match the Leopard.

Oha. All cats from Europe are already deleted. The only ship we really like is built at the end of the world in South Africa. C`est la vie. The winner is: Leopard 45. Must the maiden stop in a serious ocean for the maiden voyage. Considering that almost all Leopards go straight out of Africa, most on their own keel, gives a lot of confidence. Now the joyous task of the equipment takes attention, but that is another chapter. / HB