Land of whales, bears and the grey

Ka and I are warm-weather people. That’s why we will never sail the Rivercafe to the cold regions of the world, neither north nor south. Too cold and too grey for us. Apart from the often inhospitable winds and respect-inspiring (cold) waves. But we still wanted to visit Alaska.

Encouraged by an Alaskan (or Alaskanese?) to hurry if we wanted to see frozen glaciers, we booked a trip to Alaska after our two months in Europe. We flew 10 hours to Seattle and boarded a vessel. A cruise ship. It’s one of the few ways to get to Glacier Bay and other remote places . And I confess that we also enjoyed the side effect very much: not being responsible for a vessel and being pampered in a very luxuriously way.

Almost 900 nm north of Seattle, at 58 degrees N, we plunged into a fantastic grey world. After the lush colours of the Caribbean, we had to recalibrate our colour perception. I’ve never seen so many colours of grey.

Sunscreen and shorts are as unnecessary in Alaska as gloves and scarves are in the Caribbean. We barely got by with all our warm clothes stowed way down on the Rivercafe. The word “summer” has a different meaning in Alaska than in our vocabulary. 12 degrees, kilometre-high clouds, very rarely sun and a lot of rain – that’s summer in Alaska. Even my solar watch quickly ran in economy mode because it saw no sun. But that is normal, the locals told us. The four seasons are rain, a lot of rain, much more rain and winter. But the air is clear and refreshing. Taking deep breaths is a pleasure, unless there is a fire burning somewhere.

Apart from the weather, Alaska is spectacular. Dense forests grow right up to the shoreline. The bays are numerous and it feels as if many places have never been trodden on by a human being. It probably is, because there is an incredible amount of nature and remarkably few people. Countless waterfalls, which would be tourist attractions in other places, plunge everywhere unnoticed. Ice floes float around and you only have to look closely for a moment to see a great variety of wild animals.

On our trip we visited small towns, places in the middle of the wilderness and very remote nature. Over 70% of Alaska is a nature reserve and with the Tongas National Forest, Alaska has the largest forest of the US. 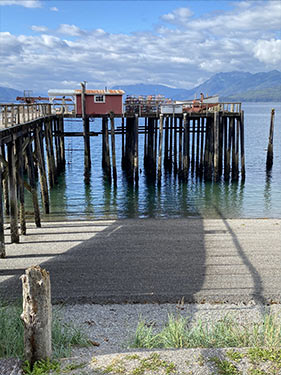 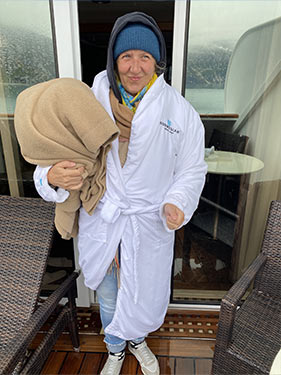 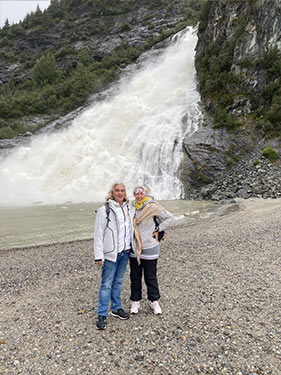 Unfortunately, when our ship turned into Glacier Bay for our highlight of the trip, we had particularly grey and foggy weather. Ships can’t dock in Glacier Bay, so you spend many spectacular hours sailing through the different inlets of the glacier bay. Park rangers on board explained what was to be seen. And despite the foggy weather, it was magical to see the few remaining ice tongues pushing inexorably into the sea. Even without the sun, they shine bluish, accompanied by an indescribable palette of greys.

In the wild, we saw grey whales and numerous humpback whales gliding through the water, blowing water fountains, then diving with an elegant flap of their fins. We watched cute sea otters lying on their backs rubbing their bellies. Sea lions, seals, eagles and other birds of prey darted around us. We watched salmon struggling up rivers to lay their last spawn. To the delight of the satiated brown bears, who gracefully ignored us, as did the black bears and fallow deer. Black-headed sea eagles circled our ship. There lives a rich and impressive wildlife, in this cold, grey nature. 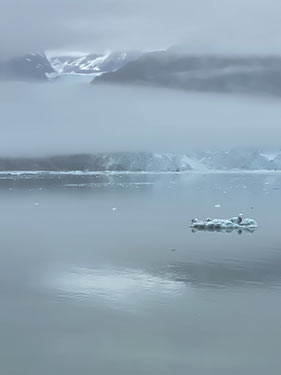 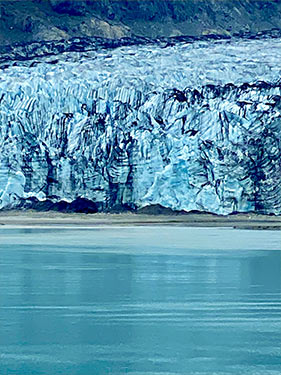 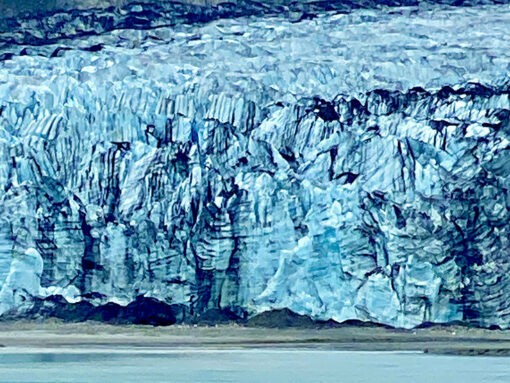 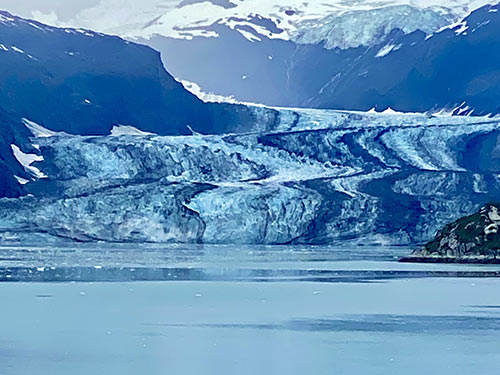 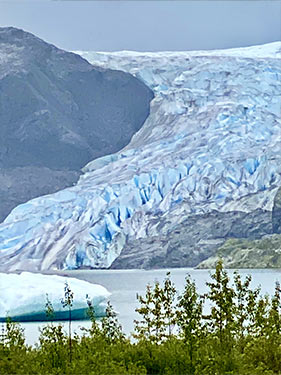 In the sheltered inner passage of Alaska, the water is as smooth and still as we have never experienced seawater. This silence was complete, interrupted only by the foghorn of our vessel. Every now and then, a glacier would crack violently as the ice calved.

In the clear and cold Arctic Ocean, vast quantities of kelp thrive. These metre-long underwater plants bind several times more CO2 than trees. But that is not nearly enough to slow down climate change. In the Glacier Bay region, the amount of ice has decreased by 50 % since 1950. The rest will disappear much more quickly. In Alaska, temperatures are rising twice as fast as in the rest of the world. And the rate of melting continues to increase. In fact, we saw only a few patches of ice left. We lacked comparison, but those with knowledge described to us the vast expanses of ice of the past. 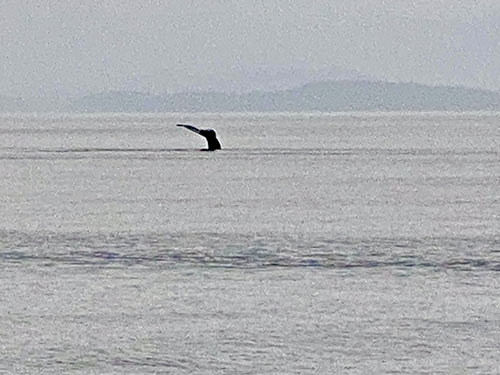 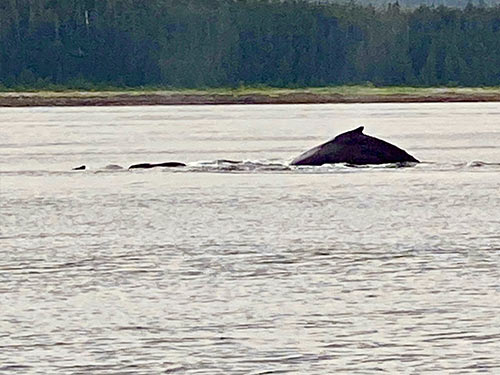 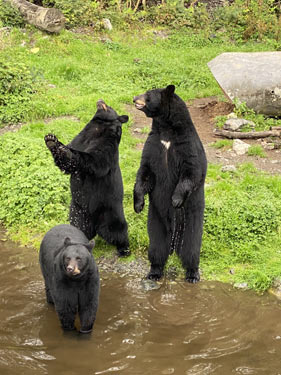 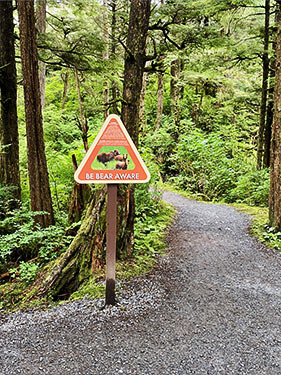 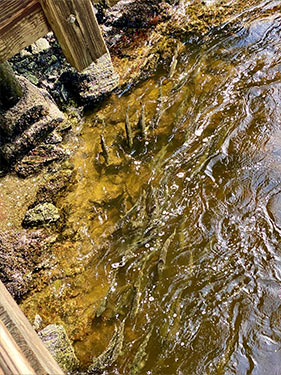 If it wasn’t so cold and grey, I would rank the area around Icy Straight and the many inlets among the most beautiful sailing areas in the world. The water is smooth as glass and is said to be rarely different. You could sail around for weeks among the islands and not meet a soul. Nature is deafeningly quiet. On the smooth sea, you only hear a whale blowing now and then. In the forest, eagles sometimes screech or there is a crackling in the undergrowth. The silence is balm for the soul. This sensationally beautiful nature can probably only be so special because the bad weather keeps people away. For once, that’s not a destination around the corner. And when the glaciers have melted sooner than later, everything will be different anyway. Maybe in 100 years Alaska will be the new Caribbean.

On the way back to Seattle, we walked through the Salish Sea between Vancouver and Vancouver Island. We couldn’t leave our bow balcony, so many humpback whales and orcas (count as dolphins, not whales) were breaching and jumping through the water in front of our ship. That was Whale watching deluxe.

We are grateful that we were able to experience a bit of real Alaska. I will certainly never forget this grey splendour of colour and silence. There could hardly be a greater contrast to the Caribbean. / Holger Binz