And it always happens at night

At the start of a rally it is so busy that you don’t have time to feel like Columbus. What a pity, because we sail almost the same way as he did. Ok, we have navigation, shower, fridge and a few more pampering features on board, which will probably make life a tuck more pleasant. And we are faster.

When we set sail on Sunday, we pretended it was a normal ARC+ and smashed “Toes” from all the speakers of Zak Brown as we set sail. “Toes in the water, ass in the sand, life is good today…”. Fits well to our journey, listen in and the winter grey will pass. That was our thanks to the formidable ARC crew, who waved us goodbye at the harbour exit. You did a good job, guys, thanks a lot.

The ARC+ 2020 was not bid farewell by a band and plenty of spectators as usual, but still some spectators came to the pier. Especially the visit of our new Irish sailing friends Rose and Peter made us very happy. We will meet again. Somewhere.

To discover the Committee Boat and the starting line between the tankers and cargo ships in front of Las Palmas was bizarre. When a tanker completely takes the wind out of your sails, the little bit of what was there, then look where all the steel in the world has landed.

Our first day ran pretty tough in the light wind. But that was not so bad, because our crew had to get used to the wind and understand the cat. I don’t want to talk about full control yet, we rather wanted to learn how to sail this cruise ship. But not even the usual acceleration zone in the middle of the island was up for action and stayed in their cave. Probably self quarantine. And because it was so slack, we changed our plan and left the spinnaker up at night as well, just to make some progress at all.

With a large crew of 5, handling is of course much easier than with two people. Compared to our 2016 crossing with two people, five people on a catamaran is a cool life. I can’t remember Ka or I ever slept in bed at the last crossing. Most of the time, the few hours of sleep in the saloon on the bench or on a pathetic thin air mattress outside in the cockpit with a painful back somehow went by. Now when we sleep in our off-guards in the right, comfortable bed, all we have to do is make sure we don’t roll away. For the supine position, the inverted Y position has proved to be a good choice. If only one of us sleeps in the bed, it is even better to use the X position. Laterally I clearly prefer the K position. 🙂 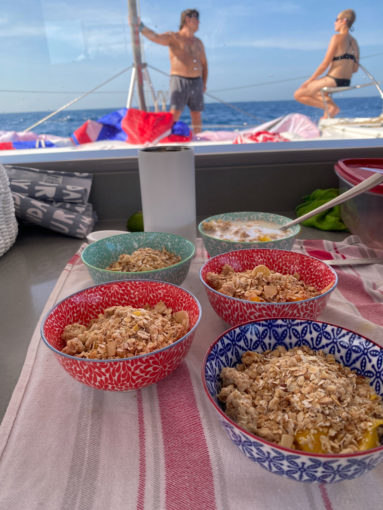 And right in the first one the event programme “Action and Stress – that the world doesn’t need” started. And clear, in the middle of the night. A fellow ARC participant crossed our bow without responding to our radio call. That still went well. And then a second ARC sailor appeared in front of our bow, for whom the electricity for the radio was probably too expensive. No answer to our calls. With the spinnaker up we only have a small navigation space of max. 40 degrees, in our case it was 20, because we were at 180 degrees before the wind. The other one was under normal sail and could have easily avoided. Well, there it was, our first emergency manoeuvre. Spi recovery in collision mode. Everything went well and nothing and nobody was damaged. But we were pretty pissed off. The good ride was done, two hours lost and on top of that 2 engine hours each on the clock, which will be added to our time later. What a miracle of technology is a radio switched on. Darling, we have to talk – in the harbour of Mindelo.

The next days it freshened up and we were able to work off our initial deficit with good speed and convert the 10-20 kn wind well into speed up to 10 kn. And very slowly they came back, the sea legs. This has only partly to do with stability. It takes time to get used to the constant movement, the waves and wind. Often the first days make you very tired and lethargic. Every activity requires overcoming. But that subsides after a few days.

On the third night there was the second unordered night event. We were just sitting together for dinner in a good mood, when suddenly the electricity was completely gone. Blackout. Ghost. Navigation, lights, autopilot – all gone. And action. I jumped to the rudder and took care that we didn’t lose the spi in the dark and without autopilot ans any sight. We started the engine and generator for safety reasons and then the troubleshooting began. All the electrical bulkheads were screwed on, it looked like in a shipyard. Only in the light of the torches. Nothing to find, we ran out of ideas. Oh how good that there are Sat phones.

With Leopard nobody was reachable anymore and so Garry got his buddy – also Garry – who gave the saving tip. The Deadman fuse had blown. This was never supposed to happen, and there was no apparent reason. I didn’t even know there was such a thing on board. After 3 hours we had power again and could continue the course. Why on earth does this shit always have to happen at night? By the way, that was the day (11.11) we wanted to arrive in Barbados, in the times before Covid.

And if nothing happens for a few hours, a refugee boat appears out of nowhere. A super motorised wooden barge with about 30 people on board. No emergency and for us rather a threat than a case of help. According to the ARC briefings, we should not provide help under any circumstances. Instead we contacted the Spanish coast guard. Ending open. But as soon as we gave the boys the signal, they left. It seemed as if they didn’t want professional help.

On Thursday we ran into a leaden doldrums which cost us the secret plan to make it in 5 sailing days. Only 6 kn of wind drove us to set the code D. This is a sail that any football fan club would pass through the station with pleasure. So really big. But if there is no wind, even the biggest rag is no use. 2.5-3-0 kn and on the wrong course. At 01.00 am we took it down and set the spinnaker. The course got better at first, but a maximum speed of 4 kn would have brought us to Mindelo only at the beginning of the week. On my night watch the wind shifted even further, towards Brazil. At 04.00 am we recovered the spinnaker and started the engine for the first time with the aim of making miles to the finish.

Tthis 03.00 to 06.00 am night watch was my first one in shorts. We have now officially arrived in the warm. But I hope that this night action will not establish itself on our further way. There is nothing like really uneventful nights, where you can just stare into the incredible starry sky.

Our fish yield is still low, the sea between the Canary Islands and Cape Verde seems to be fished quite empty. Only one shark we saw once sniffing at the bait. Our first dolphins visited us only 250 nm off the Cape Verde Islands. But that was all in, with all the relatives and several times. It is a dream to sit at the bow and watch these sensational animals. I hope they have the same fun with us. Our approach to Mindelo was accompanied by another bunch of dolphins.

Of course we still want to see something of the Cape Verde Islands and on Monday the next C19 test for St. Lucia is scheduled. So we started the engines on Friday, which will give us a handicap at the finish. C`est la vie. But until then we were the fastest cat of the cruisers. We still have two rocket cats in the field, which sail in a league that is unattainable for us. In our cruiser league we are four and that is our competition. (No Ka, we are not sailing a race . Karin also thinks that the cool guys always sat in the back of the bus).

It is nice to be back to Mindelo. On Saturday at 7 pm we moored in the marina and waited for our clearance. Thursday is the restart. Until then we still have to fix some things on board, replenish our provisions and of course explore Sao Vincente and San Antao. Maybe I can still manage to write something before our start on Thursday. /Holger Binz