Two years of preparation are soon history. After a negative corona test we are allowed to leave on Sunday at 1 p.m. with 23 other vessels. One crew got it: positive covid test and quarantine. Hopefully the control test is negative. This means that we are now only 24 ships that will be sent off from Europe by the ARC+ launch siren.

We also say goodbye to the Canary Islands ARC crew. Suzana, Anna, Roger and the others are not allowed to go to Cape Verde or St. Lucia because of the C19 protocol. Other ARC teams are waiting there, who are quarantined for 14 days in St. Lucia, for example, before they are allowed to move freely. Our heartfelt thanks to the friendly team in Gran Canaria. A great job in difficult times, merci villmols.

Shortly after the start on Sunday noon, we will set the 170 m2 spinnaker and sail with light northern winds, east along the island of Gran Canaria towards the south. (3 wind directions in one sentence rarely works). When it gets dark for the first time on our journey, we will recover the spinnaker. At night we will sail conservatively so that nobody has to set to the bow at night. That is slower, but safer. It will probably take 6 days and nights until we reach our destination, the capeverdean island Sao Vincente. 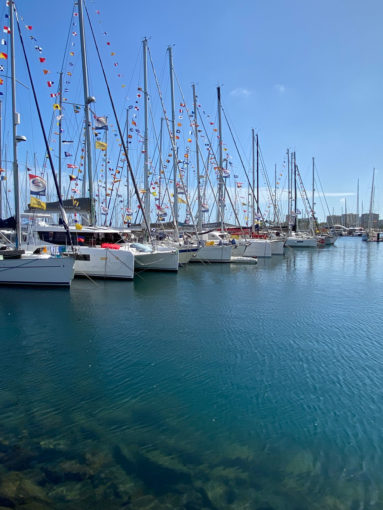 But we don’t want to keep from you that the last week was not easy for us. Right after we published the last article on Friday, we learned that Ka`s father died at the age of 83 years. Of course we are very sad, because not even Ka is allowed to fly to the funeral. Once again a C19 sacrifice that has to be made. Egidius, we will think of you at sea.

Ka managed to combine our ship christening on Sunday with a commemoration of her father. Guess he would have liked it to be festive and fun. Because of the eternal C19 protocol we were only allowed to invite a few guests. Besides our formidable crew Jana, Toni and Gary, our friends Helena, Robert, Anders and his wonderful wife Nilla, who sings goosebumps, were also with us. Nilla moistened some eyes with her impressive singing. This should keep any damage away from the Rivercafe in the future. A thousand thanks for this, Nilla.

Our very last bottle of “Alice Hartmann” – which we had been carrying around with us for months on our odyssey – finally found worthy buyers. We would be the perfect ambassadors for Luxembourger Cremant. At our christening alone we had 6 nations on board. Unfortunately, the fabric is all gone now. Oh, we are going to miss this stuff.

Normally the words “vessel” and “perfect” don’t even match. I hardly dare to say it, but we had done everything completely, the work list of the Rivercafe was empty for a short time. It will be empty again until the departure on Sunday. But the work was at the expense of our sightseeing plans. Every day was something and we only made it one day into the mountains of Gran Canaria.

The gelcoat was repaired, bow lounge LED lamps mounted, appliances replaced, a window fixed and much more. And then customs had a longing, more paperwork, online lectures and briefings and a bit of provisioning to organise. And then there was the unsuccessful search for propane gas for cooker and grill, which chased us halfway across the island several times. Our bottles are not filled in Spain. In the end, the not-so-pleasant diving of the ship in the not so clean harbor basin was off the list. But we don’t want to bore you too much with our work list.

So now we finally leave Europe for the sun and warmth. The Canary Islands are situated at 28 degrees northern latitude. That is just enough for shorts in November. Before here we sail 900 nm (1.700 km) to the south. Sao Vincente lies at 16 degrees northern latitude. This will definitely be swimming trunks and bikini. Next weekend we should arrive there. It will be very easy to follow us by the way. On the website of the ARC there is a link with the positions. And via the app “YB” you can follow the ARC+.

Marinetraffic will not work for us between Gran Canaria and St. Vincente.

For sailors there is the simple route description to the Caribbean: “Go south until the butter melts. Then turn west”. After the Cape Verde Islands we “only” have to go 3 degrees latitudes to the south. Every 15 degrees of longitude we will also change our board time by one hour. We have to do this 5 times to arrive in the Caribbean at local time.

So far a light wind is predicted for our start. This is not too bad to start slowly. We can’t change it anyway and have to take what comes.

3 thoughts on “We are off then”