It was much too short, our stay in Dominica. At sunrise at 5:30 a.m. we left Prince Rupert Bay with a glassy sea. Our 55 nm route to Martinique took us 22 nm along the island in maximum lee. Only 3-7 kn wind made it over the most effective wind cover in the Caribbean. Many islands are similar in height, but none have such complete wind protection. We had to motor if we wanted to reach our destination St. Pierre in the north of Martinque during daylight.

As soon as we reached the 25 nm passage between Dominica and Martinique, bad weather set in. The glassy sea became wavy from one moment to the other and the wind freshened from 3 to 20 and 30 knots. We pulled with 2 reefs in main and genoa with 7-9 kn through the passage, passing under the threatening deep gray clouds.

The town of St. Pierre is praised in the DK guidebook of our friends as a “thriving and modern town”. I’d like to know what kind of stuff the writer was smoking. Before the volcanic eruption 100 years ago, I’m sure it was nice. Today, it’s a village where splatter movies might be produced.

We tried to do our clearance, but the only place with a check-in terminal was on annual vacation. Apparently the village is not interested in sailing visitors either, because the anchorage in front of the village was systematically netted by the fishermen. We nevertheless stayed at the anchorage south, outside the village. The holding was good, but the wind and current turned us 360 degrees several times, complicating the coexistence among the boats.

The next morning we continued uncleared to Grande Anse. Here, too, sailors are no longer welcome. Anchoring is prohibited and what was supposed to be 50 mooring buoys has been dismantled on the north side of the bay. There are a few left to the southern side, but well over half are for boats up to 8m and almost all the others are occupied by locals. There is a capitainerie that doesn’t respond to radio calls, but shows up when you tie up to a 8 m buoy that would easily hold 15 m yachts. They told us to reserve next time. On my question, why the buoys were removed and whether new ones would be deployed, I got just as little an answer, as on my email.

The bay is beautiful, the beach magnificent and numerous pubs and restos invite you to visit. There is even an underwater snorkeling trail. It’s a pity, but you can’t show more clearly that visitors are unwanted. Grand Anse can be safely crossed off as a destination. 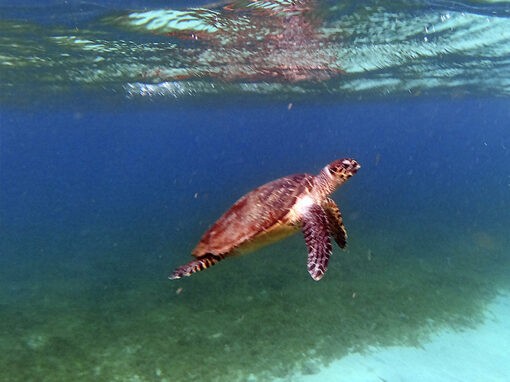 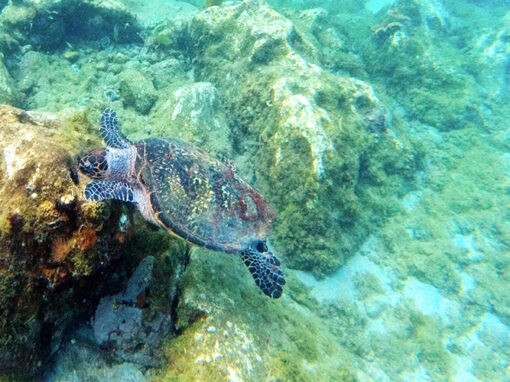 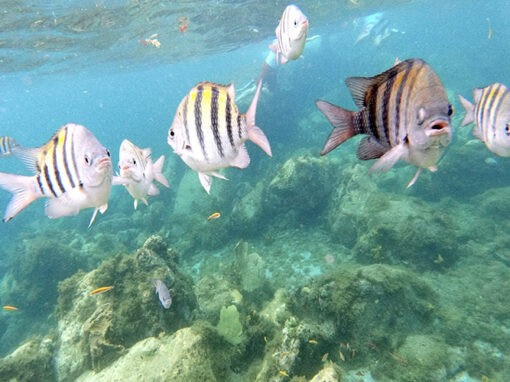 Slaloming around countless fishing traps we went to the next bay, Anse d`Arlet. Here, too, anchoring in front of the village is forbidden and here, too, the supposedly exposed mooring balls for vessels over 8 m were not to be seen. We moved again to a bay more south at anchor. The hold is ok, but you have to live with 360 degree turns. Here we finally checked in, but even that was totally absurd. After I had asked literally all inhabitants, I ended up in a backyard, in a container of a computer booth at the check-in computer. It was a matter of honor that there were no signs, not even at the door.

Into the village it is only a few Dinghi minutes. Anse d`Arlet is tiny, but a nice place. A small promenade runs right along the beautiful sandy beach, with dhingidock, bars and restaurants. But the highlight is the snorkeling area, right on the beach. There is a lot to see in shallow water and animals and plants are described in French on floating pontoons. We visited it twice.

The last sailing trip with our friends took us to the south of Martinique, to the marina of Le Marin. Unfortunately in unpleasant weather against wind and wave. We had to motor and the Rivercafe was flooded by abundant sargassum grass. I know of no place in the Caribbean where there are so many sailing vessels. In St. Anne there are hundreds at anchor, in the adjacent bay of Le Marin and in the marina you see only masts. 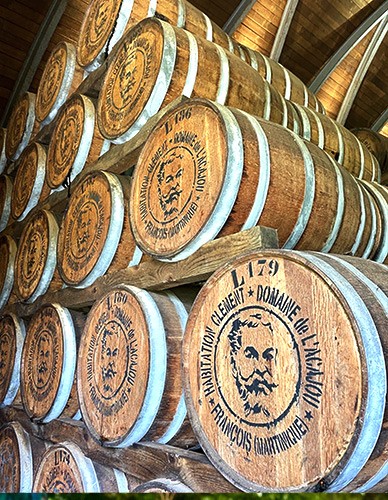 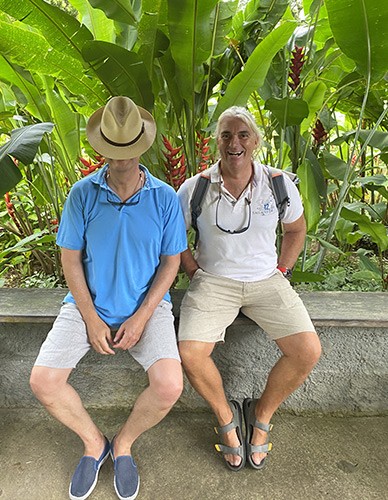 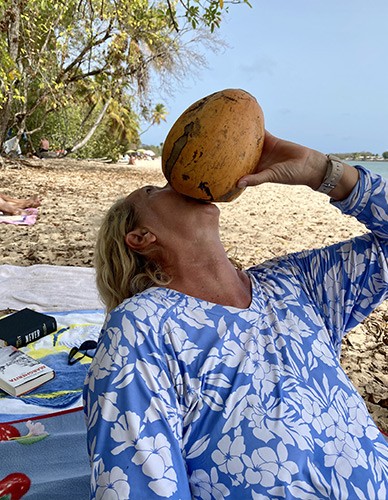 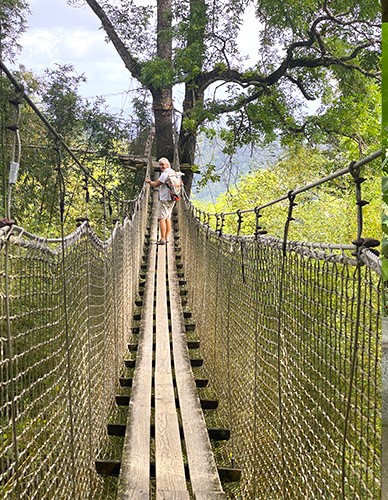 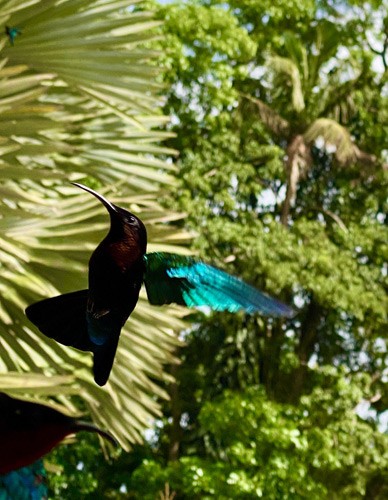 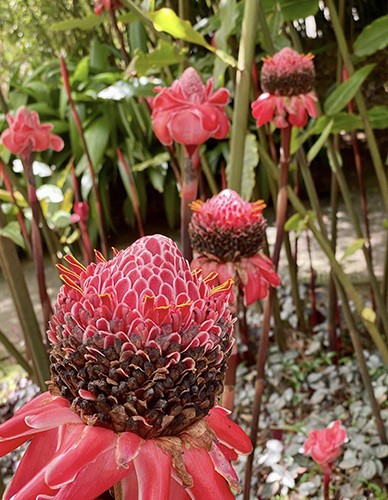 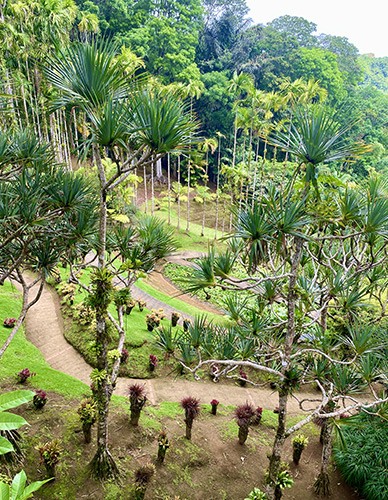 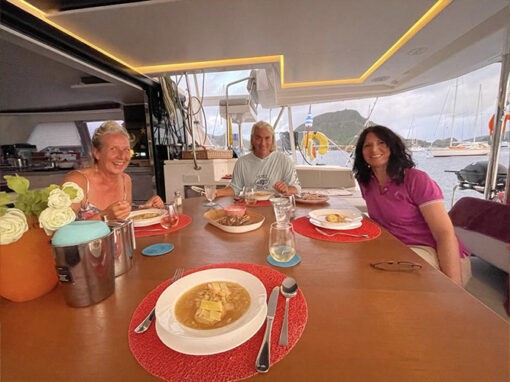 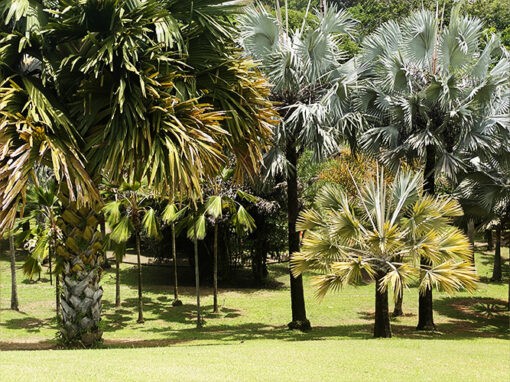 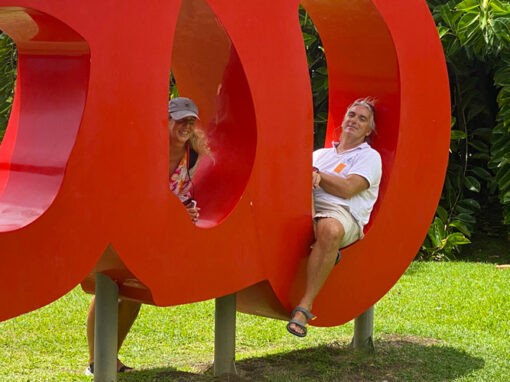 We booked ourselves into the marina for a few days and made a few trips around the island by rental car. We showed our friends places I had already reported on in a previous blog. After 11 days on board Moni and Tilman left us and we had a few jobs to do.

After visiting Martinique, we got to know two islands. The beautiful Martinique, for “normal” visitors and the not welcoming Martinique for sailors. All the places in the east of the island might as well have put up “sailors not wanted” posters. If anchoring is prohibited, then a sufficient supply of mooring balls is not too much to expect. Especially since there is more than enough space.

The climax of unfriendliness we experienced in Anse d`Arlet. Someone neatly cut off our anchor ball and stole it. It seems to me that the fishermen have taken control. Hundreds of fishing traps lie poorly visible in the water, in the fairway as well as close to shore. This makes navigation very annoying and anchoring often impossible. I guess the resto and pub owners will soon be able to read it off their annual balance sheets and then hopefully this lopsidedness will regulate itself again. And if not – there are so many other beautiful islands.

The rest of the season

We have just one more leg to go before our second season with Rivercafe comes to its end. Just one more passage of 25 nm to Rodney Bay and then a short beat into our hurricane hole in Marigot Bay. The Rivercafe will spend the hurricane season there and of course we hope that no hurricane will hit us. Keep your fingers crossed for us and the other sailors. / Holger Binz