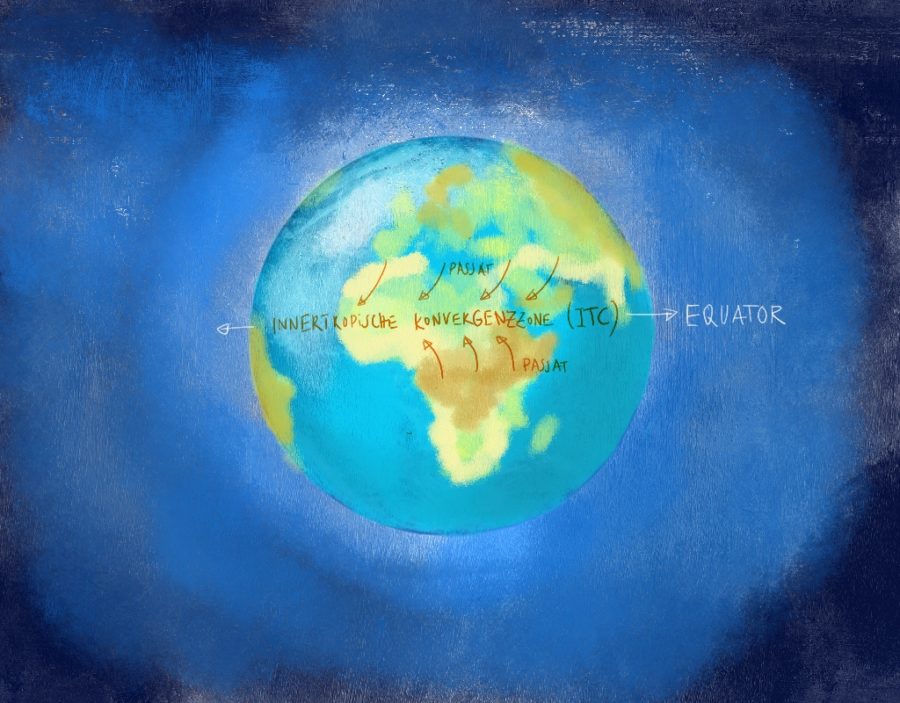 The calm of the equatorial doldrums

First the news that interests many of you: the Rivercafe has still not arrived in Tenerife. It is day 8 since the guys left Mindelo and Cape Verde. The Marina Mindelo boss Lutz was very helpful so that the stop only lasted one day and night and the crew did not have to go ashore. So the guys could save themselves and us the C19 protocol, which would have cost us further absolute useless days.

Ka and I are quite short on patience per se, but day 39 is a tough one for us. My multiple daily view of Google Earth also shows that it is an impressing piece of earth that our Rivercafe has to deal with. And now our rental car is standing in the garage, ready packed with suitcases, bicycles, fishing rods and scuba tanks. Surprisingly  the engine is not running yet. We are so ready to go straight to the boat – if it ever arrives.

But as you know, since Ascension Island we don’t have offshore communication anymore. In Mindelo we got an update that everything on board is ok. We also got new waypoints, but after those Gary should be just around the corner. I asked Tenerife and El Hierro for radio contact, neither of them can get through. That means that the Rivercafe is at least 60 nm away from the Canary Archipelago – that is the longest theoretical range for VHF radio.

As since Ascension, the only thing left for me to do is to couple the course with the waypoints, estimate the 24h distance after the current winds at the assumed position and enter a new estimated position. Is not really exact and even less satisfying, but better than nothing. Or maybe not. On the route Ascension – Cape Verde I was only about 30 nm off. Now it is clearly more.

A few days ago we learned that two of our guys swam over the equator. This is a fantastic equator baptism and with it the Rivercafe was on the northern hemisphere for the first time in their lives. That the sea is so calm that you can swim in the middle of the Atlantic Ocean is not uncommon in the zone 10 degrees north to 10 degrees south around the equator (theoretically 1.200 nm wide). This region around the equator is called “doldrums” and it has driven generations of sailors to despair. The speciality of this low-pressure trough: no wind. And there are several reasons for this.

In the doldrums, the trade winds of the northern hemisphere (NE) meet the trade winds of the southern hemisphere (SE) – and neutralize each other. The winds converge and this is why this area is also called the ITC “Inner Tropical Convergence Zone”. Beyond the 10 degrees north and south, the trade wind zone, the corridor sought by sailors, follows. The ITC itself can reach up to 20 degrees north and south and is in constant motion, which also influences the size of the windless doldrums.

In practice the doldrum zones are much smaller than 1,200 nm, predictable and with current weather data the crossing in our times can be well planned. Provided you receive weather data.

However, to compensate for the calm, the doldrums then prefer to deliver rain – which is not necessarily unpleasant on board in the heat. The reason for this is the sun. The sun is vertically above the equator and lets the air rise vertically. As it rises, the air cools down, condenses and delivers rain downwards.

Compared to the “old sailors” we have it much easier today. Ships that cross the equator usually have plenty of fuel to propel them through the doldrums. The fuel supply of the Rivercafe is sufficient for almost 1,100 nm, so there is no reason to spend ages or weeks in the doldrums that our ancestors had to endure in the days of the wooden sailing ships.

And back to the Cape Verde Islands

When we start again in November with the ARC+ in Gran Canaria towards Cape Verde, our way will be only 800 nm long and 2-3 days shorter than the current way Rivercafe takes. The reason is of course again the winds and the current. Usually wind and current on this route come from the north. They give a pleasant down wind on the way to the Cape Verde Islands. On the opposite course, which Gary and his crew have to sail, they have headwind, i.e. the wind on their nose. That means: they have to tack and jibe and that lengthens the way. In contrast to Gary and his crew, we will stop in Mindelo on the island of Sao Vincente for a few days on our way to the Caribbean. For us this will be a nice reunion, because we have already been to the Cape Verde Islands with our Oysterbar 2016. But more about that then. / Holger Binz