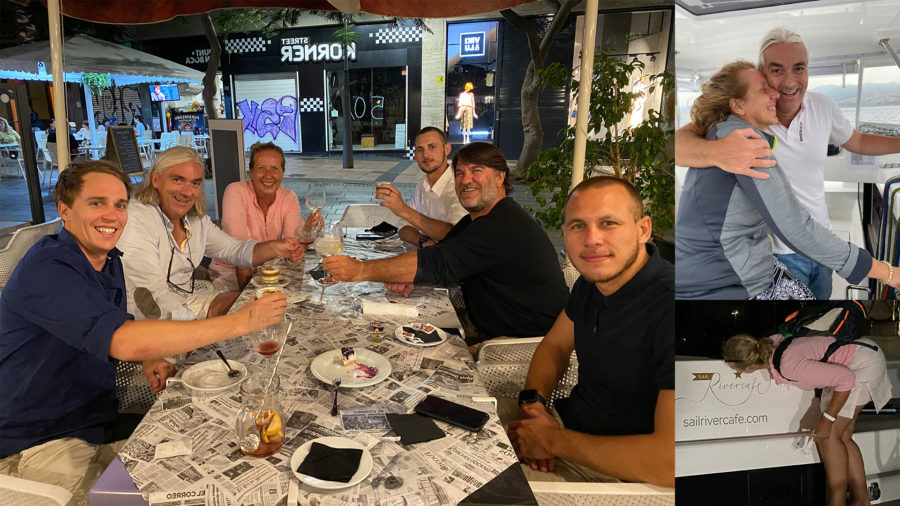 Many thanks to all who fevered and crossed their fingers with us. The Rivercafe arrived healthy and in one piece in Tenerife.

What a day. Gary, Simon, Franco and Brandon brought the Rivercafe to us from halfway around the world. It was overwhelming when it lay in front of us on the jetty. Three months later than we thought, but still earlier than waiting in vain for an entry into South Africa.

When we received the first AIS signal on Saturday afternoon, we stood cheering on a beach road in a small village and immediately had to water it with Babette and Fred. 38 sailing days, 3 days on land and 150 nm in 24h per day, that was the way of our formidable delivery crew in figures, arrival on Sept12. at 11 p.m.

And that was anything but a piece of cake. But as the fantastic guys told us, a special experience. Sailing is an alternation of ups and downs. After big waves and too much wind, you might be rewarded with special moments. For example, when the wind stops in time and you can swim across the equator. And that really in the middle of the Atlantic. Especially for Brandon, one of South Africa’s best competitive swimmers, this is certainly a real blast.

Guys, you were great – thank you all very much. We couldn’t have found a more likeable crew.

The first days on board were less romantic than we thought, but they were busy. The Atlantic Ocean leaves its marks and the need for care. Clean out the stuff from the transfer, put our stuff in. But above all, getting to know the ship. Gary is still on board with us, because he is not coming back to South Africa as fast as we thought because of C19 and he will leave next week on my birthday.

We have roughly finished the clearance work and these days we try to understand the technology and to eliminate the mistakes. The Rivercafe is already quite a lot of boat and we still have a lot to learn and understand. And then there is the sailing, which we have to get a grip on. We have already managed one training day for harbour manoeuvres without any dents or scratches. Not bad at all, because mooring on port (left) is blind for the helmsman and we have to train our procedures first.

So sorry to everyone who has already written to us and asked us – without getting an answer from us. Now you know why.

After almost a week on board we are quite happy with the ship. It’s really nice and no comparison to our Hanse 505, but there are some things where Leopard still ca get better. Our list of shortcomings had only 16 points, but there are some real bucks in it. Forgotten light installations, wardrobes without fastener or a forgotten watermaker installation. But the most glaring mistake is that the winches are completely undersized. We have to replace them. This is our main concern, because with the quitish little things (45s), it won’t work. I am annoyed that I did not insist on bigger ones. I already had the impression during the test sailing, but unfortunately I let myself be persuaded.

But what is encouraging is that our energy supply is fantastic. We don’t even need shore power, because the solar panels supply the ship completely. And that, although we don’t even have much sun in Santa Cruz. This promises a lot of pleasure at our future anchorages.

While I write this, the Yanmar technicians are servicing the two engines. The rigger is just checking the rigging. And next week Raymarine will take care of our navigation, AIS and radio, which also need attention. Then we’ll reposition our life raft and do some smaller things. This will all take much more time than we thought, but we’ll be fine.

The main thing is that we are back at sea and slowly we are beginning to enjoy the first moments of anticipation for the time in the turquoise Caribbean. /Holger Binz

and the story ended with a margarita. But not in Venezuela on the beach, in the company of tantalising beach beauties but in Santa Cruz de Tenerife and the beach beauties became the happy owners Ka and Holger. But the Margarita was still delicious. If you knew what other stories Ka had in mind, you would never want to talk to us. The hitchhiking was one of the most harmless. We are very grateful to your fabulous brother and he will certainly bring you inspiration from the delicious Canarian lemon cake. You can be proud of that great guy.. 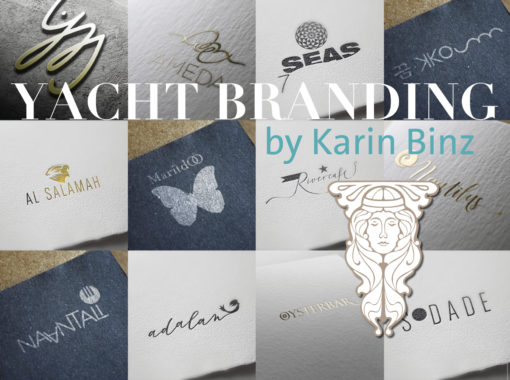