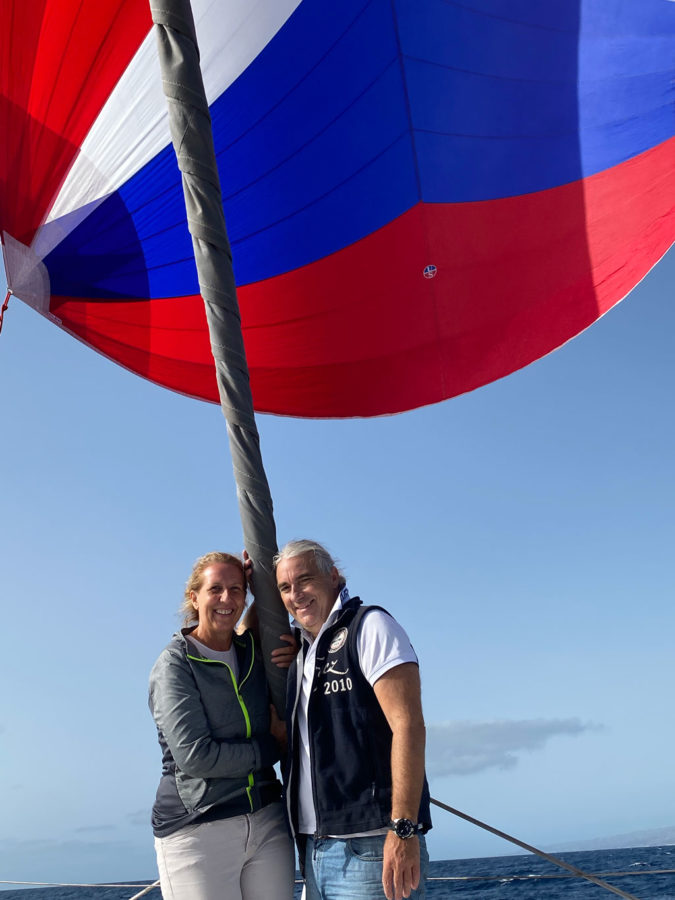 The first week on board

“Honey, it’s not what you think.” This is usually used in a different context, but it hits our first week quite well. It was very different than we thought. Romance just above zero but a lot of work and frustration about shortcomings. But a great time with our delivery captain and friend Gary, who saved our first week. We are motivated by the fact that we will soon be sailing in a sailing paradise – the Caribbean.

My sister said so nicely: “I thought you could start sailing with a new ship right away”. I wish that were true. It remains a dream. We have a total of 25 points to work off. These are things that were not done properly by the shipyard, like winches without reinforcement plate, missing lights or locks and such like. Then replace broken stuff, like bilge pump or navigation monitor. And finally, upgrades that make our lives easier: more cleats, a new life raft rack, a slot for the navigation chips (Raymarine doesn’t have !!!!), new (more comfortable 🙂 ) mattresses – and stuff like that. And then there was the banal little thing that we still don’t know how to handle the ship properly.

For the first time we were C19 profiteers. Because of Covid Gary spent 10 more days on board. Now he has not only the title “Captain of the Year” but also “Guest of the Year”.

He spent hours to get the Watermaker and the AC working, which were not properly wired at the yard. However he has saved Leopard a huge effort. I can’t even list the countless things that Gary repaired and improved with incredible patience. And then the best captain of all had the time and patience to train with us. Sailing harbour manoeuvres and flying spinnakers. That was pretty cool. With a wind of 9 kn our little boat went 7 kn speed. But we could not set the mainsail with the useless winches. So it goes step by step. Unfortunately we cancelled our plans to sail the islands. First everything must be perfectly done and run stable. Ka and I hope that we will see Gary again soon and that our common plans will work out.

But every day we make the Rivercafe a little bit more our home. And it is really a very nice vessel and a wonderful habitat. If the outer cushions were still there now, it would be super great. Supposedly they will arrive in Gran Canaria next month.

We will spend the next week in the Marina de Santa Cruz in Tenerife. Unfortunately it is often cloudy in the north of the island and not as sunny as in the south. But there is always enough for shorts, even in the evening. The marina is right next to the city’s and that is very pleasant. We have the impression that life is also slowly returning. For Germans and Brits the Canary Islands are still a risk area, but the C19 values are decreasing strongly and people hope that there will be at least one winter season. Almost everyone here is very disciplined, wearing masks, keeping their distance and being careful.

This morning the first cruise ship, the AIDA Nova, moored one dock further away. For months 5 cruise ships have been lying in the roads outside the city, like ghost ships. However after one day on dock, it went back to mooring next to Santa Cruz. Hopefully some normality will come back into the world. It would be much deserved for the friendly Canaries. / Holger Binz

P.S. Thank you very much to all who remembered my birthday. I was very pleased.