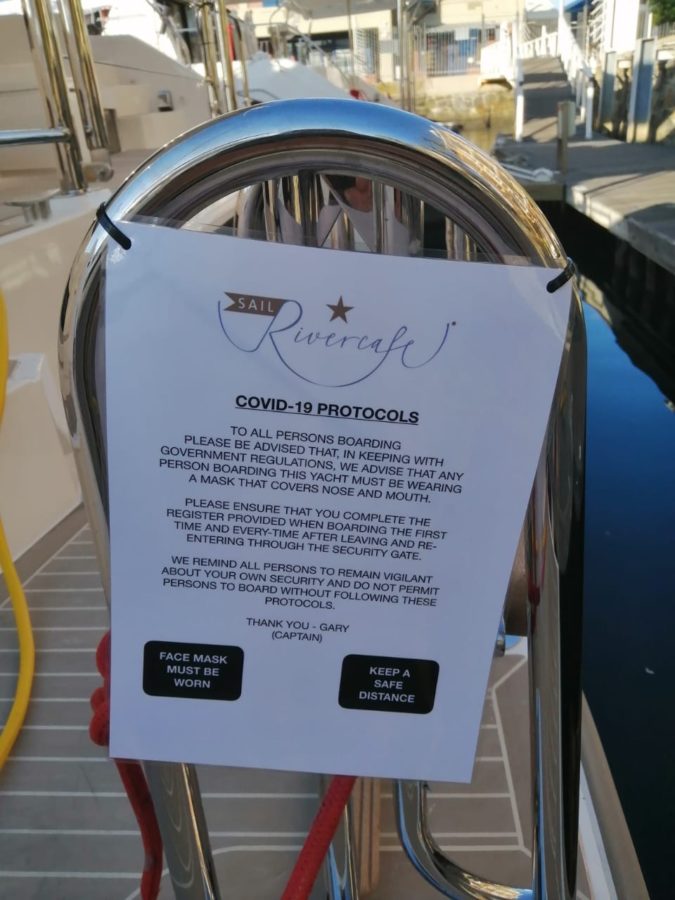 Adieu Rhein, bienvenue “La Mer”. Since we replaced the Rhine by the sea a week ago, everything is back on track. And it’s the real sea, the Atlantic ocean.

The last few weeks haven’t been the best for us. The hotel hopping in Germany was annoying – or was it our multiple daily look at the corona numbers in South Africa? We checked every piece of information to see if it offered an indication for a possible entry. But the more we found out the gloomier the outlook became. We needed a new plan.  Plan D 7. And it’s just getting off to a very good start.

8.000 km away from our ship, we are organizing our further journey on the wonderful roof terrace of our friends Ruth and Gibbes in Tenerife. Meanwhile our fabulous delivery Captain Gary is preparing the Rivercafe Corona compliant. He takes care of the handover, the equipment with spare parts and then sails the shakedown at the beginning of the week. If everything is ok on board, he and his crew can start the 10.000 km long journey to Tenerife at the beginning of August.

We took one of the last hurdles last week. Our 23 boxes have finished their 4 month odyssey and landed on board. Without these boxes Gary could not have left South Africa. Medical kits, tools, technical stuff, on-board equipment – we sent all this from Luxembourg to South Africa. GMS (Global Moving Service) arranged everything perfectly. Despite unannounced border closure secured with weapons (merci, Germany!), stopped shipping traffic in the UK, entry ban in South Africa, clearance ban in South Africa, weeks of traffic jam in Cape Town and subsequent traffic jam at customs in Cape Town. Many thanks to Yasmin (GMS) and Peter (Britannia Cape Town) for the superb job. We will always be happy to recommend you. When I read through this again I must confess that it is a miracle that everything arrived. Well, now everything will be sailed back north 5.200 nm. C`est la vie.

After the weeks of uncertainty, the whole thing is slowly becoming fun again. Because we have a good chance to receive our vessel in Tenerife at the beginning of September. It is nice when people from ZA write us that the ship looks great. But it is much nicer to finally see it for yourself.

By the way, the Rivercafe can now also be found on Marinetraffic.com If you type in “Rivercafe,” you’ll see our location in Cape Town. We’re the only ship with those names in the world. With this tracker you will be able to find us for years to come. The Marine Traffic app is even nicer, by the way.

With Plan D7 on track, of course, we also had to change routes and ideas. Instead of whales, albatrosses and St. Helena in the South Atlantic, we now head from the Canary Islands across the Atlantic. Unfortunately, our friends Ute and Herrmann will not be accompanying us. But we keep our fingers crossed that you get your cat ready and that we meet in the Caribbean in winter. But it is nice that our friends Jana and Toni will be with us. Jana took a time out especially for this trip and therefore it would have been tragic if at least the “short Atlantic crossing” had not been possible. The four of us will surely be more relaxed, because we had already done our “two heroes program” last time. This time it can be much more relaxed.

That we are not allowed to sail the mega route from Cape Town across the South Atlantic has already disappointed us. So what, that has to come later, on our circumnavigation. Sometime we will get to Fernando de Noronha.

Elsewhere in the world the sun is shining too and Plan D7 has some advantages. For one, we can equip the ship perfectly on the Canary Islands. What a pleasure for the (female) owner (designer) heart. Here you can get everything. Then the Atlantic route is with 3.000 nm instead of 6.000 nm only half as long. For a new catamaran surely not bad. But we start later and arrive in the Caribbean in December instead of November. This is because the trade winds stabilise later in the northern hemisphere than in the southern globe.

And finally we decided to sail the ARC+. The kick for us was that the ARC will not be the usual mega event this year, but will be much smaller. At the moment 50 ships are registered in the ARC+. However we are almost sailing the route we already sailed in 2016 with our Hanse505. On 8.11. at 13.00 h (no joke) the rally starts in Las Palmas de Gran Canaria with course Cape Verde. On 19.11. there will be a restart in Sao Vincente with destination St. Lucia. There we will arrive shortly before Saint Nicholas day.

So finally we have concrete goals in front of the bow again, although completely different than we thought. But that’s the sailors life. /Holger Binz