We’re pretty much sideways in the world right now, but of course we get the depressing news from Europe when we’re online. It wasn’t good timing of me to write about tanks in Culebra just then, while a criminal is having a country invaded. Sorry for the faux pas. Our times are obviously not that enlightened after all because young soldiers still allow themselves to be abused as spineless killers..

With this war in mind, it is not easy for me to report about comparatively banal things. But perhaps it improves the mood a little. However, our week was not a highlight.

We dropped our idea of sailing from Culebra to Vieques to visit the bioluminescence. We received too many reports that some of the inhabitants of Vieques currently have an unsettled relationship with other people’s property. There seems to be a lot of theft going on, including from boats. And the change of ownership of dinghies is apparently intensified with the help of bolt cutters.

The visit to Luminescence would have made it necessary to leave Rivercafe unsecured at the anchorage for a few evening hours. We didn’t want to find an empty vessel, and the loss of our dinghy would also have put a heavy strain on our travel kitty and created a very bad mood. A dinghy is at least as important as a car when you live in a deserted village. It is the only dry connection from the anchorage to the land – so it is especially valuable.

No recommendation for Abe

You need a guide to visit the bio-resort. Unfortunately, we opted for Abe’s Snorkling and he seems to confirm the dubious reputation of the islanders. Despite cancellation in due time, he neither sees the need to communicate with us nor to refund our advance payment. So whoever comes to Vieques: Abe should be avoided.

Vieques would have interested us immensely. The island is said to be 50 years behind all other Caribbean islands. That’s because the US-Americans had a military base here for many years and little civilian life has developed. Perhaps another time.

Back to St. Thomas

So we decided to cut our time in the Spanish Virgins short and return to the USVI. It took us four hours from Culebra, against the wind and uncomfortable wave, to St Thomas. On the way, we discovered that a valve on a water pipe had ruptured and half of our fresh water found its freedom in the sea. We managed to save the other half by turning off our water pumps.

Quite unpleased, we moored in “Brewers Bay”, a recommendation from sailing friends. We obviously have better hearing, because the noise from the adjacent airport quickly got on our nerves. It went well with our irritable mood. An hour later we were moored in Honeymoon Bay off Water Island.

Without a repaired water pipe, we could have left the USVI right away and had to head for the BVI for another repair stop. Life on board without fresh water is somewhere between unpleasant and unbearable. See our Atlantic Crossing. We immediately set about getting our water supply back up and running.

Not very mood-lifting, we then suddenly had no internet access to research what needed to be done. The semi-legal Liberty Telecom sales guy in St. John had not quite told us the truth about the data card we had purchased. We lost our connection at the perfectly inopportune time, but more of that later.

After some time, we had a makeshift installed that we would manage with for the next while. We started the water maker (only by solar energy) and filled our tanks with fresh water again. Not bad at all for a designer and a business economist – and even more so for marketing people – that we managed to do that. We grow with the tasks.

Back to the data mess and Murphy’s Law. Our online connection broke down just as we had initiated our US entry formalities online. The visit to Puerto Rico made it necessary to re-register in the US. And then, in the middle of the process, we were gone. Offline. For more than a day. The friendly US immigration officers must have taken pity on us and sent us an immigration confirmation by mail the next day, without a video interview. “Merci villmols” (thanks a lot in Luxembourgish), dear US officers. If someone reports about a bad treatment at the US immigration again, we will step up for you. As a symbolic thank you, we later bought and hoisted the correct white USVI host country flag instead of the USA flag.

We were able to solve our data problem with the effort of half a day and (as always) extra costs. Once we had all our little problems under control, we became aware of our surroundings for the first time. 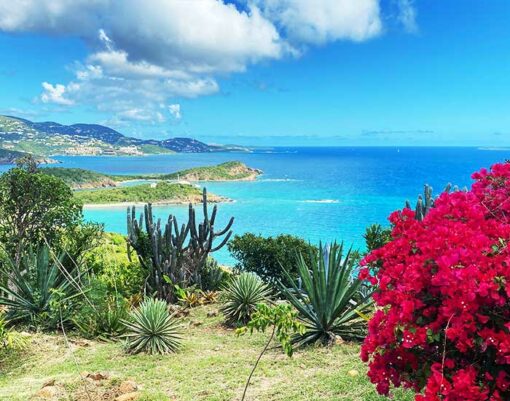 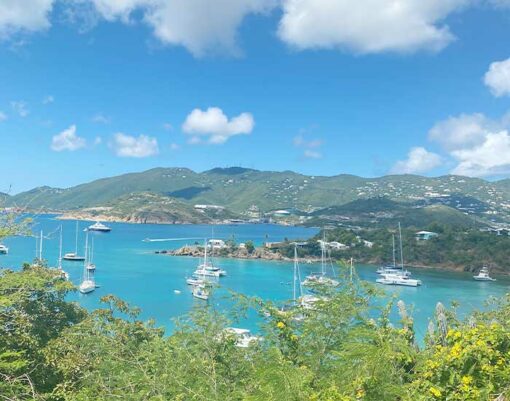 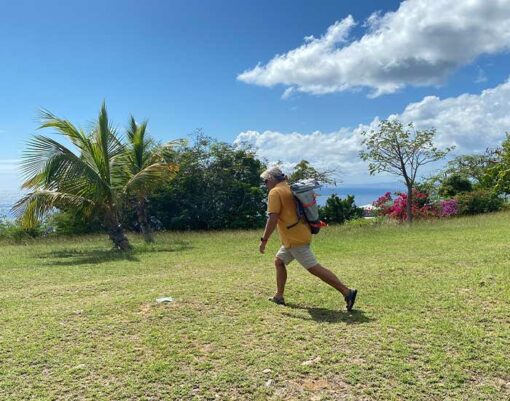 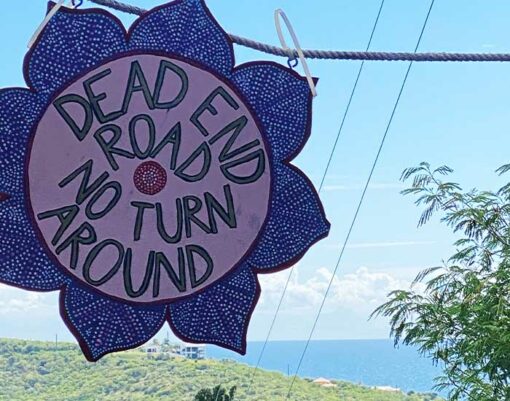 It`s a beautiful island, Water Island. A great bay, this Honeymoon Bay. Well protected from wind and waves. Clear water, a white beach and a beach bar called “Dinghy Bar”. Everything like in a picture book. We decided to spend a few days here without waves and problems and let our irritability subside. First thing in the morning, a jump into the water and an outdoor shower sets the world to rights again.

Water Island is sideways opposite St Thomas with Crown Bay and the French Quarter of Charlotte Amalie. It’s a 5-minute dinghy ride to the mainland.

As with all the islands we visit, we hiked over Water Island. We found a pleasant, small, hilly island, only 2.5*1.5 km in size. Very well maintained and with homely houses. There is an old fort and a garden that still has a lot of charm. And of course Honeymoon Bay, with sea turtles and jumping rays. (Unfortunately, we never manage to photograph them).

The name “Water Island” comes from the times when sailing vessels were desperately in need of fresh water. There used to be water here, so the island was called “Water Island” more pragmatically than creatively. Pirates anchored protected from the Danish cannons of St. Thomas in Honeymoon Bay, Druif Bay by its second name. 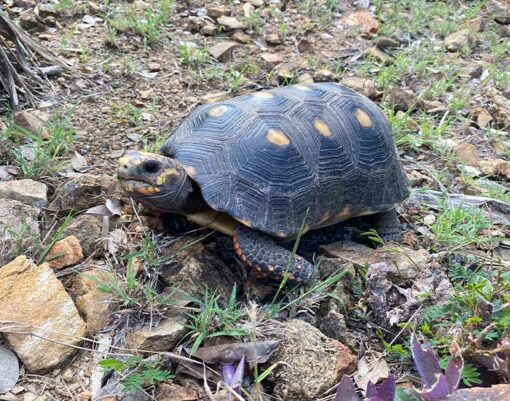 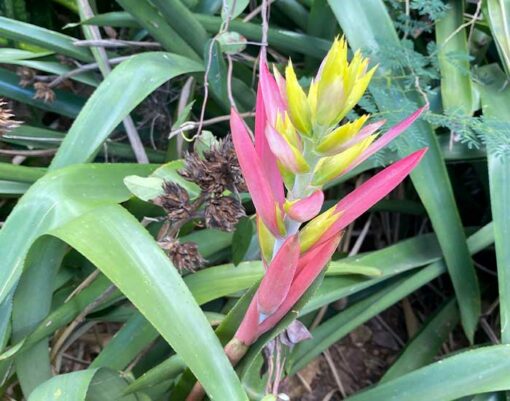 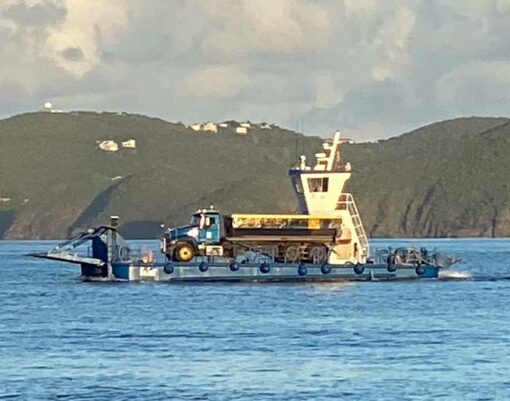 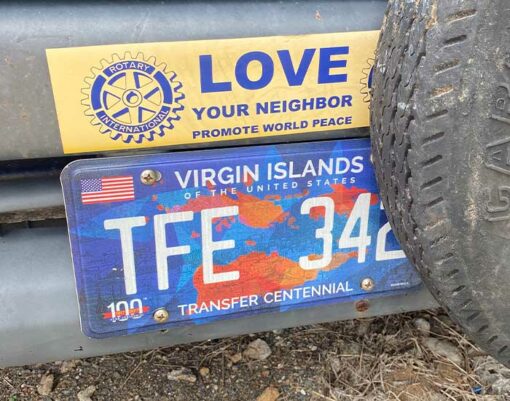 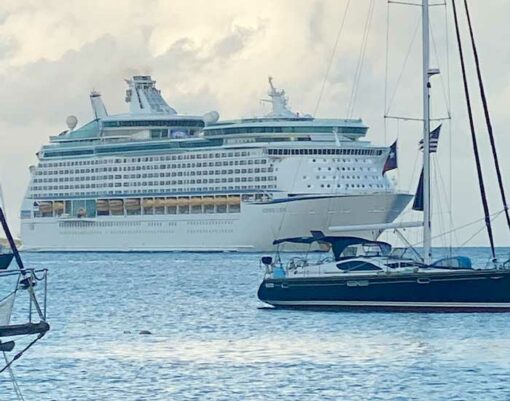 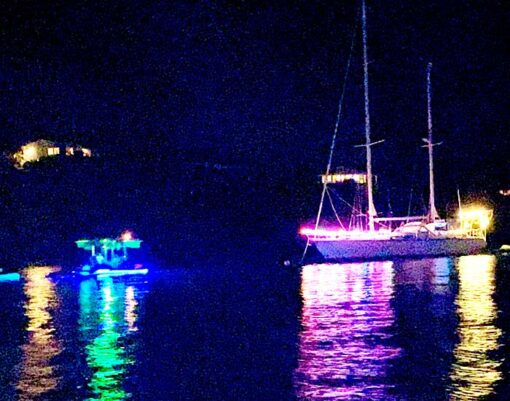 Today, 50 inhabitants live here and they collect rainwater. There is no shop and in order to get your food you have to go by boat or ferry to St. Thomas. It is a simple and quiet life. Except on Sundays, when it’s a hustle and bustle. Then some modest and much less modest mainlanders from St. Thomas come with small and not so small boats, for the posing festival on the beach. The noise level of the power boats (South of 1000 hp) can easily reach Formula 1 level. In the evening, the spook is over, until the next Sunday. / Holger Binz

2 thoughts on “Back in the USVI”